Vedanta results have been awful. That’s pretty much the adjective of most results nowadays but here’s the summary:

• Oil contributed biggest to their fall, but the real deal was:

• Interest costs: which remained the same despite a 20% drop in revenues

• Aluminium results too are terrible, and this is where Vedanta has the maximum capital employed. 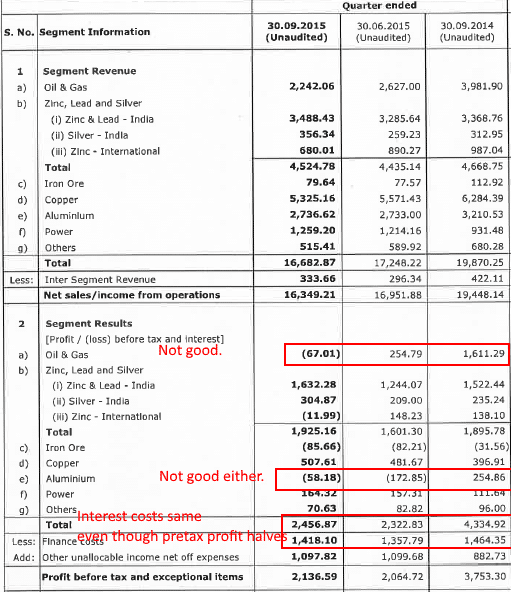 And a Bigger Issue is: Cairn

Cairn’s profits have collapsed. They have announced a profit of Rs. 673 cr. which is 70% lower than the 2278 cr. it made in the Sep 2014 quarter. On the back of low crude prices, realizations for crude have fallen, and profits are even lower  than the 835 cr. profit they saw last year.

Cairn is supposed to merge with Vedanta sometime, with a 1:1 swap, plus a 7.5% redeemeable preference share to Cairn shareholders. The issue is that Cairn’s cash will vanish into the arms of Vedanta, which will have to use it to pay off some debt (some of which is its own – Vedanta has borrowed money from Cairn).

CNBC TV18 insists that LIC and Cairn Energy (UK) have forced Vedanta to reconsider the merger ratio. But this will hurt Vedanta’s promoters, who might lose more of their holding if Cairn shareholders got a sweeter deal.

When we analyzed the deal at Capital Mind, we found that:

• The deal was not great for Cairn shareholders, who get the crappy metals business but also have lesser cash.

• The share prices of Cairn and Vedanta were both Rs. 180 or so at the time of that analysis. Now, Cairn has fallen to Rs. 157 but Vedanta is dying at 105. The share ratio definitely does not make sense to the market today which seems to be betting on a rejig to 1.5:1 instead.

• There is a huge tax liability on Cairn India which could see them paying out Rs. 10,000 cr. to the Indian tax authorities. That will take out the cash anyhow. This chart tells a story – it’s the collapse of the metal picture. as much as the “double bottom” around 84 looks heartening, the situation continues to worsen for metal players worldwide, with metal charts not looking good at all.

Our view: Vedanta isn’t a good position to go long with, even technically now. The stock looks like it’s in a zombie zone, and is likely to slip back into two digits. Fundamentally, results are so bad that it makes the P/E ratio of 10 or so look expensive in comparison.

However it could be attractive if it reduced the interest costs, and that can be done if it got access to the Cairn cash. The key to the story is the Cairn merger – if they are able to negotiate it back to the 1:1 ratio, this will be good for the company. Otherwise, bad.

Cairn is primarily a bet on oil prices. And we don’t think anyone should bet on oil prices going back up just yet. So we’ll just hold that thought. For a Cairn shareholder the only reprieve is that the merger is rejigged to 1.5. Even then, there is no major upside – the Cairn/Vedanta price ratio is currently 1.5, so at best it remains that way.

The merger is the key, and could rerate Vedanta upwards since it can then get past the massive interest issue that pulls down its profits.