The Indigo IPO is on. It’s for:

• Existing shareholders are selling 2.28 cr shares so they get about 1744 cr.

Indigo has a 37% market share in terms of passengers flown which is bigger than SpiceJet, Go Air and Indian Airlines combined.  Jet is the closest, at 22%. 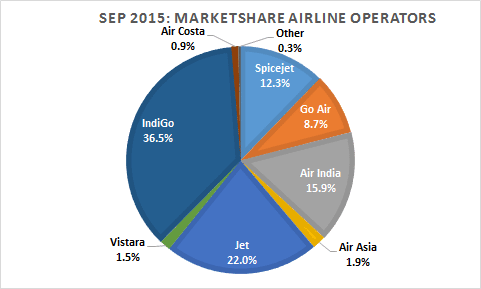 But Jet has been losing market-share for a while now, with Spicejet coming back on steam, which has also eaten into Indian Airlines’ market-share. But Indigo has managed to retain its share: 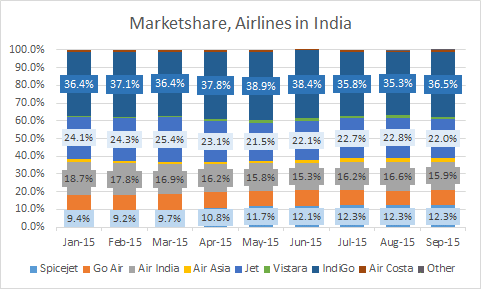 How’s the Aviation Situation In India?

We have all these operators and all those airports. Is the market growing? Answer, sort of. The number of passengers flown have been growing recently, and it seems to be a cyclical. The problem? The growth has slowed overall, to about 14% after the 21% highs we saw earlier this year. 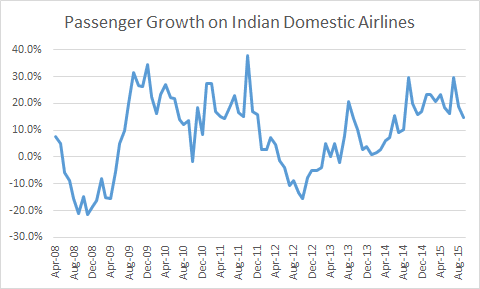 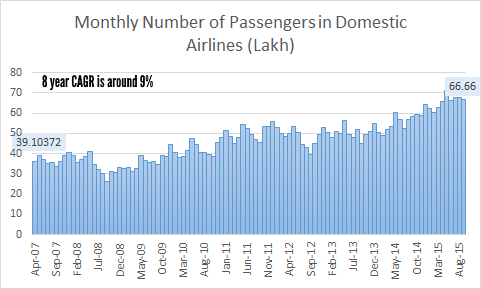 If you’ve been flying then you’ll notice that fares haven’t increased substantially from the times of 2007-08 to now, in rupee terms. In 2007, I could fly to Delhi for 6,000 to 10,000 rupees (round trip) and even now, that’s about the fare you’d pay a couple weeks in advance. Given that fares haven’t gone up by much and inflation makes today’s fares cheaper than in 2007, then a lack of super-growth in the passenger count is a little troubling.

When you evaluate the largest player in a market, you need that market to be growing, because the hungry smaller players will continuously try to take market-share from you. And the only way you will win, is if your market is, by itself, growing like crazy. This market is, quite honestly speaking, not growing that much, looking at the data. And even that little growth is slowing.

But What About The Company?

All that was market gyan but is the company overpriced? Is it growing? What has it got?

• They are a profitable low cost carrier

• They have phenomenal on time performance. We have both anecdotal and DGCA data for this.

• They have 430 aircraft on order, from Airbus.

• They sell and lease back their planes.

They intend to use Rs. 1,100 cr. to buy back some of their leases. And about 35 cr. to upgrade their ground support equipment. Buying back leases is probably just for show; we don’t think this adds much value, but we’ll go with it.

The company will be valued at about Rs. 26000 cr., with FY15 net profit at 1,295 cr. That is a P/E of 20, which is reasonable given that the company needs a premium just for being profitable.

The big deal here is crude and competition. Crude prices have fallen. So costs have fallen. Normally this would have triggered a price war. But their competitors are either new, bull-headed or so deeply loss-making they can’t think. Spicejet is trying to lift itself back from the ashes. Jet airways is sitting there losing market share month on month and apparently smiling its days away. Air India is on perennial life support and please don’t even talk about efficiency here. Or, like Kingfisher, dead. Therefore Indigo gets to live on the higher margin that would otherwise have not been available to it. In the context of an e-commerce business, you want to be a customer and get all the money that is being handed out to you – so Indigo should and will get all the money it’s not otherwise having to compete for.

There is also a lot about Indigo that is good, which is colored by our personal experiences. For instance, they sell a miniature plane set and a plane shaped school bag, which, if you’re travelling back home after a long day, makes a great gift for kids. But please don’t let that color your view of this IPO.

The Stuff You Really Want To Know: The Bad Stuff

Here’s what I don’t like about this business, but it’s not necessarily an indictment. You just keep this stuff in mind when you invest.

The promoters are cashing out, big time. Just before this IPO, they have declared for themselves a massive Rs. 1,000 cr. dividend. In the June 2015 quarter! This is dividend for the FY 2016, and their first three month profit was 640 cr. They literally paid themselves all of that profit, plus a good portion of whatever was left. Now they’re raising 1,200 cr. for the company, and are selling 1800 cr. of their own shares. If you think about it real hard, the promoters just took out 1,000 cr. (actually 1,200 cr. including dividend tax) and are now raising another 1,200 cr. – all of that money is you, as an investor, paying them. Nothing wrong with this, but don’t be under any illusions that the company can use that money and do oh-so-much. If the company needed that money, the promoters wouldn’t have paid themselves that dividend.

There has been an issue of negative net-worth. Dividends paid out have been so high that the company’s net worth dipped to -139 cr. in March 2015. This was probably unnecessary – since the promoters have received over Rs. 3000 cr. as dividends in three years. But the hurry in taking that dividend, regardless of a note on negative net-worth, is crucial to understand how long you should be an investor yourself.

Also the Indian market is small. Most traffic is in just 5 sectors and those are full. To introduce more traffic, they will have to wait for the Indian economy to grow into the second tier cities, and that will take a while because let’s just say things aren’t very good on the ground. Plus, in many cases, it’s cost-and-time-effective to take a train: for example to fly to Chennai from Bangalore involves a 2 hour drive to the airport, 1 hour to get in and frisked and all, then a 40 minute flight, and eventually 1 hour from that Airport to get to where you need to go. A train takes 5 hours. Such issues complicate the growth story, and then you have massive investment into the rail sector too as competition.

Plus they have over 20% of their net income from “other income” – interest from FDs, gain on sales of investments etc. added up to Rs. 383 cr. out of the Profit Before Tax of Rs. 1800 cr. This isn’t that great when your interest component falls due to falling interest rates, and when you don’t have that many investments to cash out.

There will be more dilution. The company has to raise more money or the promoters have to sell, in order to bring their ownership down to 75% (They’ll currently own about 88% or so after this issue). This will happen in the near future. Note: This is a good thing. If promoters will sell they will want a higher stock price. Which means they will work to show more profits. Which means the company’s stock price will go up, and that’s pretty much all that you want.

For a profitable airline, 20 P/E isn’t bad. The forward P/E is looking even better, and likely to be 15 or so. They are lean, they have low debt and they are listing at a time when crude prices are low and likely to remain so.

This is not a bad deal, and therefore you are unlikely to get any allocation.

There are lots of things that should give you warning signs for long term allocations. But we don’t believe most people are in IPOs for the long term anyways.

We would apply for a smaller amount since we expect extreme over-subscription. If it’s too badly oversubscribed (on Thursday), it may not make sense to apply – if you wait till then. The heavy over-subscription means you will necessarily get tiny amounts, and even that could be a “lottery” based application random choice. Buying on listing may be better depending on how “hot” the listing is.

Note one thing though: If there is a huge over-subscription, the stock market could crash. Why? If you have, say, Rs. 20,000 cr. locked out as ASBA or in trust accounts, then that 20,000 cr. is not going to be available to invest in the market. We have seen this earlier – the 2006 crash happened after the Reliance Petroleum IPO (3,000 cr.) which saw a 7x retail over-subscription and an overall over-subscription of 45x. (A key difference then: Institutions didn’t have to pay until allocation. Now, even institutional money is locked in until allocation through ASBA) The market subsequently crashed more than 30% till June 2006.

In Jan 2008, we saw to mega IPOs: Reliance Power and one from the future group. RPower was massively oversubscribed (73x total, 15x in retail). A few days after the IPO the market totally tanked, going down about 20% in two days.

We believe that the market tanked due to other news, but because money was locked into the IPO, people who would otherwise be buyers will not have money available. Currently we see that the Indigo IPO is looking interesting, and institutions have piled on. But should this result is a massive over-subscription (think of 15,000 to 20,000 cr. as a massive number) then we could see the lack of support hurting the market.