The US has tightened up its tax collections through the FATCA process. And India’s a signatory. Which means people who have bank accounts in India but are US citizens, or permanent residents, will see the Indian banks notifying the US authorities with all information on debits and credits in India.

This must have spooked a number of people who are technically US residents (citizens, people with a green card or a work visa) and have income in India and haven’t declared it. This used to be standard practice, and in many cases, it was quite easy to:

Suddenly this earlier plan collapses. If a US person owns property in India and earns rent, that rent will attract taxes in the US (even if India has favourable laws such as a 30% write off as expenses etc). How does one handle it now?

Apparently, many people have taken the panic route. They have, it seems, gifted their assets (money or property) to relatives – tax-free under Indian law – and then those relatives have sent the money back to them as part of the Liberalized Remittance Scheme (LRS).

The ET says it:

First, they ‘gift’ their assets and investments here to ‘relatives’ (as defined under Indian income-tax law) who are staying in India. Being gifts, such transfers are tax-free in the hands of those who receive them. The second leg of the transaction involves these local residents in India remitting the amounts received as gifts back to their NRI (non-resident Indian) family members using LRS.

But How Bad Is It?

Unless you were born yesterday, you would find this situation a little abnormal: 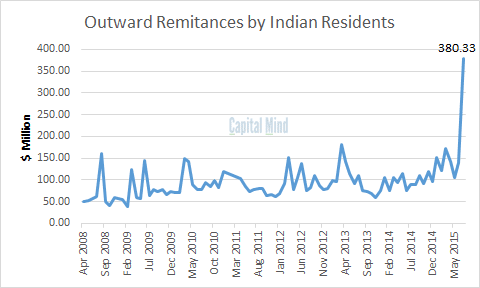 July saw a ludicrously high $380 million worth of remittances.

And 1/3rd of it was: For Education Fees

According to RBI data, $113 million was remitted for “Study abroad”. 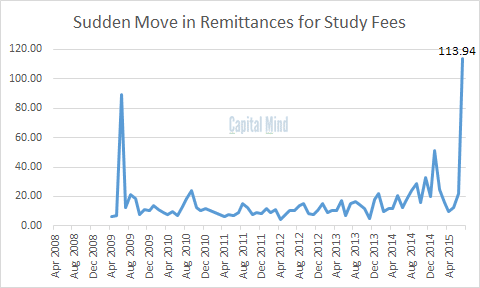 While this is definitely study season, it’s not really like Indian student traffic has gone up substantially this year – the earlier limit was $125,000 per year which, to be honest, is a lot of fees. If a school charges more than that, there’s very few people that can actually afford these heavy fees. So the change is abnormal, by most standards, and given that now you don’t even need a bill from an institution (you just need to say it’s for studying) you can remit the money without any proper cross checks.

The global economic crisis must be really bad because, after being the world’s #1 destination for remittances from abroad Indians have suddenly begun to maintain their relatives abroad now: 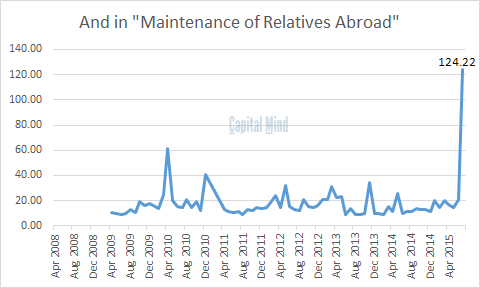 Our View: Not A Big Deal For Indian Authorities; It’s A US Problem

If anything the US tax authorities would need to take notice. There is probably zero implication of this on Indian tax authorities. If it’s money sent from India by individuals, then it’s post tax, clean money. Not “black money” which would not go through normal banking channels.

Given that FATCA is more or less applicable now, this kind of remittance will probably last only a month or two and then go back to normal levels, given the one time nature of the tax-roundtrip.

If the US tax authorities begin to act, US people with Indian backgrounds are unlikely to send money into India for things like investments. With the Indian government also keen to tax any foreign assets (as the Black Money Bill indicates), it’s becoming plain now – you can’t hide your money in a foreign country hoping your country won’t find out. Eventually, they are likely to. It’s best to just stay clean.