India’s Consumer Price Inflation for September 2015 shot up to 4.41%. Much of this is based on the flattening of the inflation index last year between October and December. The base effect will ensure inflation looks high. 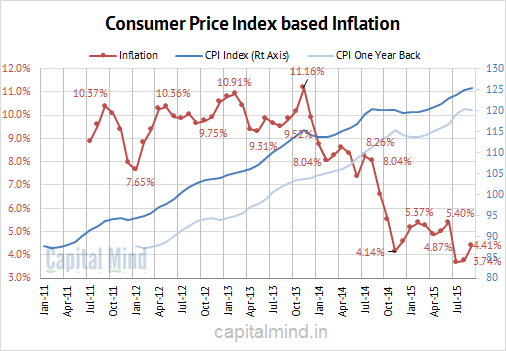 Inflation in certain components, though, is starting to show. As you can see, fuel inflation (despite the large fall in fuel prices, which have been negated by higher duties) has been rising. Food, Transport, Medical and Household item costs seem to be slowly going up. 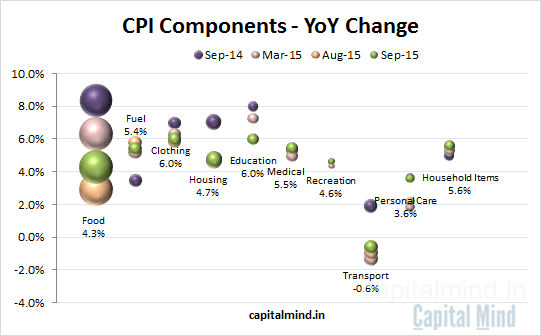 Rural inflation has gone above 5%, even as urban shows a small uptick: Our View: The Next Three Months Are Gonna See High Inflation

We’re getting some mixed signals now. Inflation is up on the base effect but the slope of inflation is showing that it isn’t following the trajectory of last year. On a month on month basis inflation has calmed down (August was terrible) but the quarterly move (which negates the annual base effect) is still fairly high at 10% plus. (Meaning: inflation in the last three months was 2.5% which translates to 10% annual) 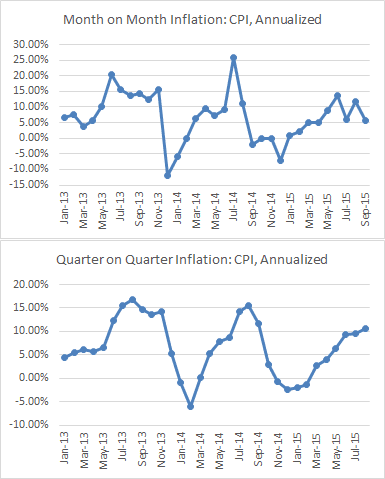 Given that there is annual seasonality and much of CPI comes from Food, what we will see as inflation is about how the monsoon delivers. Our view is that:

Inflation isn’t a major issue for markets anymore – the RBI has already cut 50 basis points so there’s no need for any more! We track it right now because it should be tracked, not because it’s pointing to some action. The big thing now is: results. Nothing else will impact us more.