The Trade Deficit for September came in at the lowest in five months even though exports and imports were flat. Last September was awesome for India with very high imports and exports, so the fall in percentage terms was very high. 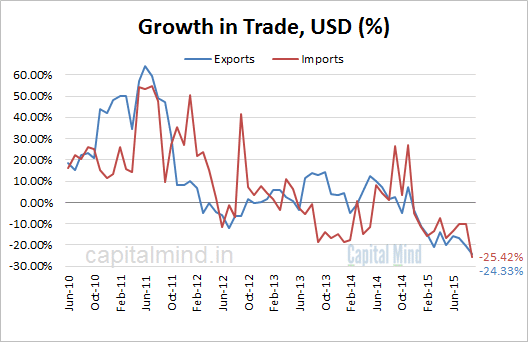 And the problem is as much in non-oil imports as it is in oil imports. The worldwide commodity price drop has taken effect: 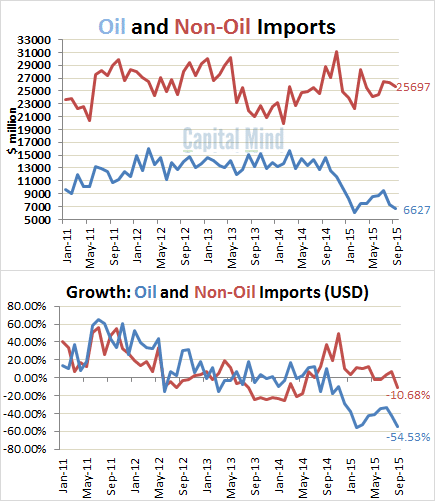 And with that we bring you the last bit: 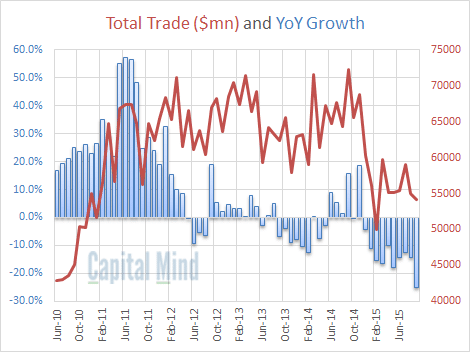 Total trade has indeed fallen off a cliff in terms of growth. The base effect will have magnified the September numbers but the trend is down, down and down.

Have exports and imports bottomed out? The market’s rally makes one think this is so.

Markets rejoice every few days for reasons unknown. But eventually they will come back to reality. And the reality is simply that our exports are in bad shape, even though imports have fallen due to the fall in the price of crude. When it comes to non-oil imports we have seen falling numbers – if prices are lower, we should have imported more. But what we’ve done is imported 25% less. Imports are more an indicator of Indian demand – and thus, the Indian economy.

September will be a trough, because of last September being that heavy. But the next two months – October and November – will probably tell us the real story. I’m not very enthused.