There’s a lot of stuff out there but in order to not confuse you:

You can see from here that despite the rate cut, banks aren’t going all gung ho and borrowing from the RBI.

From July, here’s how the situation has been: 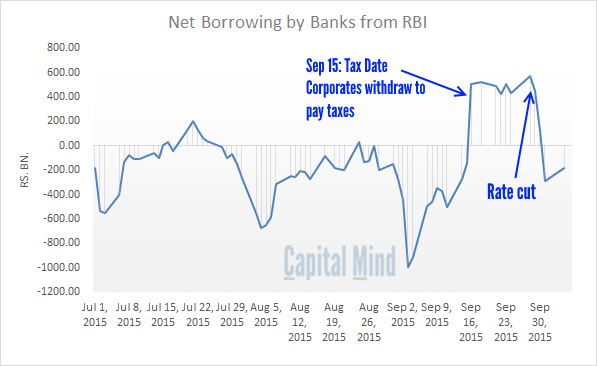 For most of the last three months, banks are not borrowing money from the RBI at all. (Other than the few days when the tax payments caused them to need overnight liquidity as corporates took out money).

Banks are parking money with the RBI instead.

The rate cut effectively only reduces the interest they get (since the rate cut has taken RBI’s interest rates lower).

Therefore, the rate cut is negative for banks!

Banks would be happy to lend if they found the right opportunities. They could have lowered their interest rates earlier too (after all, they weren’t borrowing from the RBI at all, so RBI’s rates didn’t matter). They just chose not to, and chose to get a very low interest rate from the RBI instead (about 7.24%).

The fact that they chose to park money with the RBI and not elsewhere tells you how lousy the credit situation must be – no one wants to borrow from them at their rates, they refuse to lower rates, and keep the lower income instead.

My deduction: the reason they refuse to lend now  is not because they don’t see the obvious (cut rates and lend) but that they are spooked by potential NPAs.

Now, after the rate cut, they have cut rates and STILL have excess cash that they are parking with the RBI. This data better change soon; otherwise it’s much worse than we are being told.