Axis Bank has fallen majorly today. It fell from 521 yesterday to 482 today, a fall of 7.5%. There’s a good reason: the worries about asset quality. 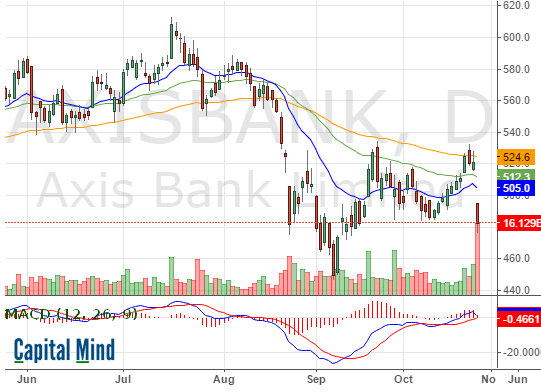 In their conference call, they mentioned that they sold loans to Asset Recovery Companies (ARCs). These are typically companies that buy bad assets from banks and then attempt to recover those loans.

During the quarter, it has emerged from the Conference call and probably inadvertantly mentioned, that:

This kind of stuff is common in banking – where banks refuse to see the writing on the wall for ages.

In that context, Axis bank is perhaps actually good in writing down the loss immediately. The other banks are simply pretending these losses do not exist, or are spreading the loss over way too many quarters so that we don’t realize how bad things really are. This is legal, but it should not be. However if we force losses on banks they will never recognize those losses. So we let them amortize the losses.

Axis probably doesn’t deserve to lose 7% on something like this, but it’s a sign of things to come. When a mention of an “auto investment” that defaulted was mentioned in the conference call – presumably Amtek Auto who has sold bonds to Axis Bank and has defaulted on Sep 14 – the management said they have not taken any hit yet. The default will take 90 days to happen – that is, banks get 90 days to say, okay this is a default – and they will take that hit this quarter. We don’t know the quantum yet, but this will be another example of a “standard” asset that has gone sour, a story for the next conference call.

(In comparison, JP Morgan MF which also owned the bond had to immediately recognise it and separate the problem bonds into a side-pocket which investors cannot exit. The bonds have been immediately recognized as bad, and everyone now knows that if they get something bad it will be a good thing. The same bond held by a bank leads to: pretend that everything is fine and take the real hit in the next quarter)

We don’t have a recommendation either ways on Axis Bank, but the banking system is indeed seeing stress. While the situation isn’t as bad right now, investors are spooked by what this story is really telling us – that we really don’t know how bad it is out there. And Axis Bank  had good intentions – of cleaning out the asset from their books before it turned really bad, and recognizing the 65% loss it should have done earlier. But you wonder how bad it is when you have to compliment someone for doing the right thing, while worrying that others aren’t yet doing it and when they do it will stink to high heaven.

Disclosure: No positions. No relationship with the bank.