You are being asked, no, told, no, ordered to cut rates today. This almost sounds like something you should rebel against, because no one orders you to do anything. But indeed, this isn’t about being overly sensitive to what some random joker has to say, and there are a lot of random jokers out there.

I think you’re going to cut rates by 0.25%. Not because you have been ordered to, but because you spent the last two years making the RBI predictable and based on what you said, you’ve got the data you need for that rate cut. If you’ve made it really clear that a) you want banks to follow up by cutting their base rates and b) inflation should remain under control, then we perhaps have to grudgingly say, although my heart isn’t in it, that the data says yes.

Not all banks have cut rates. Some have only made symbolic changes. But the cutting has begun. And you have a right, indeed, to demand of the Finance Minister that he order his banks to consider cutting rates enough to make their customers’ lives easier, before accusing you and the RBI of not providing what is at best a placebo. We’ll get to that.

(In that context, we would appreciate a clarification – if base rates are cut, they MUST apply to all borrowers. Some banks have, apparently, taken to some statement you made the last time about “marginal rate of credit” to imply that current loan holders will not see a cut in rates. You must dispel with such fantasies)

But there are issues. The fact that in inflation is low compared to last year is due to the base effect of it being high last year. You’ve mentioned now that with current numbers, if you removed the base effect (so, in effect, taking monthly or quarterly moves rather than annual) that inflation is much higher. By my calculations it’s as high as 10%. (Though I simplify it by multiplying month on month inflation by 12, rather than the mathematically correct mechanism of using square roots. Why I do that is because the inflation index is unidirectional – it just never seems to fall)

And then, we have the vagary of our monsoon: 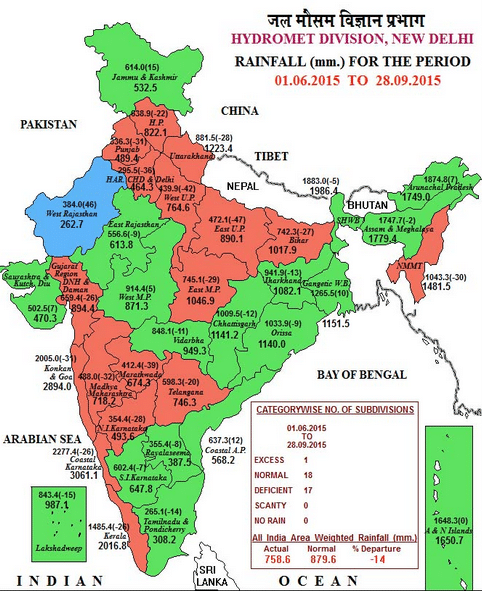 The story of inflation may not be behind us, but then inflationary effects of the monsoon can take a long time to hold. Last year, we planted 10% less in pulses. It’s only now that the impact is really bad. (However, planting this time is right on the ball – we have planted more than last year, of Rice, Pulses, Cereals and Sugarcane. Only not as much in Jute and Cotton)

The story on growth isn’t good, but you could say that of any country now. Brazil’s in a recession, Europe’s a mess, Russia’s getting hammered after crude, China is in the deep end, only America seems to have signs of some resilience. India’s story worsens too: we have had two quarters of negative earnings growth on the Nifty stocks, we are seeing a spate of defaults in infra companies, our commodity players are getting hit due to the drop in world prices and our steel manufacturers can simply not compete with the likes of China or Russia or Japan or Korea. We are in bad shape, and the problem isn’t interest rates, it’s business.

You will consider stoking demand through lower interest rates, of course. It’s fairly clear – you wanted the data to support you, so you held back a rate cut in August. The data’s spot on now, and the concerns are about the future. So I expect you to cut, but to state that look, inflation better not get worse from here.

But I think you’ll do more than just rate cuts. The government’s deficit is under control and they need less support from banks. So you might cut the Statutory Liquidity Ratio, which is how much banks should hold government bonds, by about 0.5% (or announce a policy of continuous cuts going forward). This is nice, but you know banks hold too much anyhow. 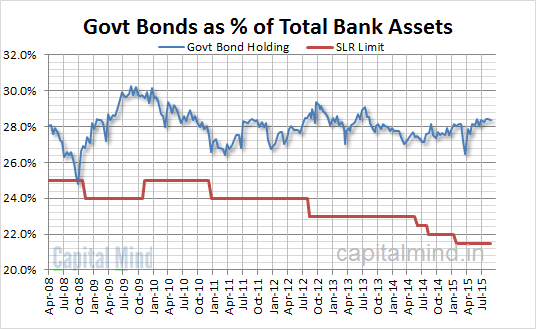 Oh and the rate cut won’t change anything either. Banks are borrowing very little from the RBI in comparison with earlier – in fact in the last 45 days, they have been parking excess money back with the RBI on most days. A rate cut simply means they get less for their money when they park it.

You’ve made good on your promises for easier recovery norms – allowing lenders to take over companies, ensuring that lender take earlier action on potential NPAs and keeping regulatory forbearance low so banks are not incentivized to evergreen bad loans. But you need to ensure they follow up; banks are terrible at this and even though bond markets recognize a default, banks themselves don’t, even if they hold those bonds.

You’ve given us more banks, Payment and Small. We hope there will be more freedom in terms of NBFC regulation easing (for lending, investing and for payment systems).

You’ve talked about allowing intermediaries to sell government bonds to the retail public. Selfishly, I would like more clarity on this.

The biggest thing that people are looking for is: are you hawkish, or are you dovish? I don’t care. Just be predictable. You’ll want to say everything depends on data, and that position is not in the air, as hawks and doves go. It is firmly on the ground.

An ardent follower who isn’t afraid to criticise.