Consumer Price Inflation (CPI) for August 2015 is at just 3.66% which is the lowest in this series. A heavy base effect contributes to this low number, as we had mentioned last month. 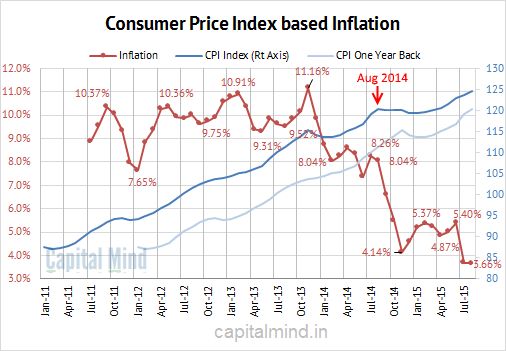 Even at the low 3.66% you can see the inflation is due to a high base effect. If you look at the how the index flattened out after that, then it will be quite something to have inflation this low going forward. August will end the falling inflation trend, almost surely.

Food Inflation At Low But Other Elements Are Slowly Increasing 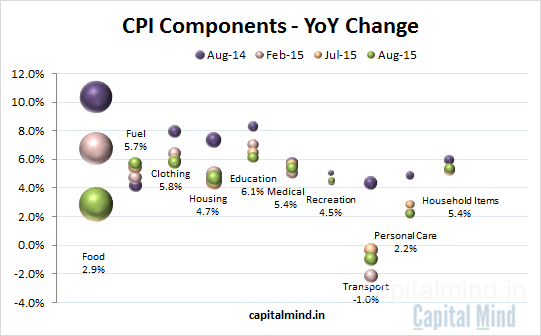 Last year in August, Food inflation was high (10%+) which meant that the base effect makes food inflation low. But food inflation is going up slowly – it’s at 1.6% higher than July. And September data till now doesn’t look good.

Fuel inflation (which shouldn’t even exist!), with Housing and Medical seems to be inching up too.

Rural Inflation Is Moving Up, While the City Dwellers Seem To Have It Good 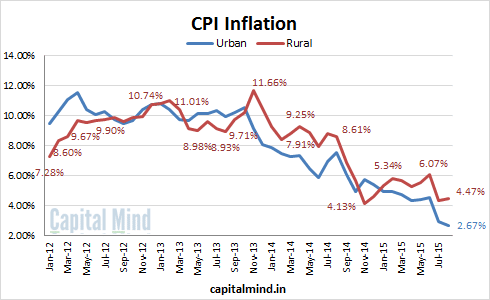 Even then 4.47% is not much. I know the entire western world is salivating about such inflation numbers – but for India this is fairly low.

But consider the base effect. If the last month to this month change (1.8% on food, 0.8% overall) continues, we are going to see 8-9% inflation headlines by February, and that is undesirable. The RBI will note this carefully.

However, we have to note that RBI acts on available data. They will have to continue the direction of interest rates because there really is no point keeping interest rates at current levels. Since banks are now:

It makes sense to cut policy rates, because that means banks will earn EVEN lesser interest by parking money with the RBI.

A rate cut of 0.25% will do nearly nothing to change the lending landscape – if banks wanted to lend, they would be lending even now instead of parking money with the RBI. But if this spurs banks to cut rates, the markets will go up, temporarily.

And then they won’t because hey, banks aren’t lending.