We’re getting into protection zones.

The Finance Ministry yesterday announced a 20% “safeguard” duty on steel. This is to protect domestic industry, apparently, because China, Japan, South Korea and Russia are selling steel at very very low prices.

On the representations of the domestic steel industry, the Director General of Safeguards had initiated safeguard investigations into alleged increased imports and consequent injury to domestic industry and issued a preliminary finding dated 09.09.2015 recommending imposition of provisional safeguard duty at the rate of 20 % ad-valorem, for a period of 200 days on “Hot rolled flat products of non-alloy and other alloy steel in coils of a width of 600 mm or more” classifiable under heading 7208 or tariff item 7225 30 90 Chapter 72 of the Customs Tariff Act, 1975.

If you plot the exports and prices per unit (from Zauba) you get a chart that does show increasing volumes but at much lower prices. 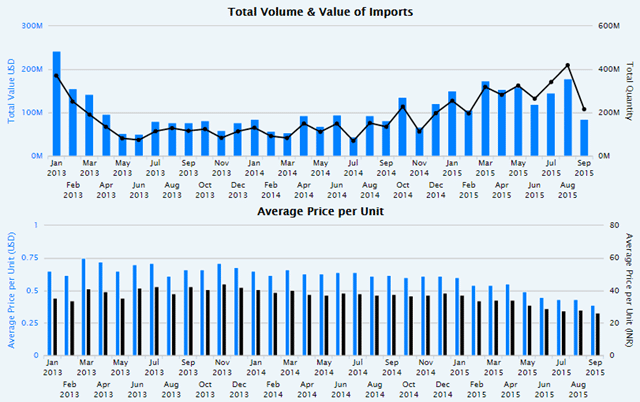 But it’s not entirely right to have this kind of duty; we should be getting cheaper steel to build industry, make cheaper cars and pass on the benefits to our people. We didn’t allow that with crude either (high excise duty, to protect the government). We aren’t going to let it happen with steel either.

Now Demands for Textiles and Tyres Too!

So apparently, there’s even more demand for protection.

“If the present level of dumping continues unchecked, the domestic textile industry will be extinct over the next few years. China, facing over capacity, has for long been dumping their fabrics and ready-made garments to our market through Bangladesh, Nepal, Vietnam and even Cambodia,” Chairman for Policy, Apparel Export Promotion Council Premal Udani told PTI.

Udani’s firm Kaytee Corporation is one of the largest garment exporters to American retail chains.

This is so strange. Because if you are an exporter, you are competing with China in the international market, not in India. And the duty won’t do you any good.

And then you have this too:

If MRF claimes that anti dumping duty is needed, this is shocking. Because despite the big drops in the price of rubber and crude (which is the base input for synthetic rubber) we have not seen a big drop in prices of tyres. And Chinese manufactured tyres are now offering big 25% to 40% discounts on tyres compared to the Indian biggies. They simply have to get with the program.

Duties are NOT the answer

Increasing duties will not help us. If we are to “make in India” it shouldn’t be so much more expensive for us compared to manufacturing in, say, Sri Lanka. And we should not have duties for intermediates like steel – after all, cheaper steel means a benefit to us. So what if a few companies are in trouble – you see IT companies die all the time, have you heard of them asking for support to stop competition? The steel industry needs some players to die before they reinvent themselves, and are likely to hit a few banks heavily too. But that will not be solved by duties.

And if we think the rest of the world will sit idle while we impose duties we are grossly mistaken. They’ll wait and watch, and then hit us with something else.

This is probably just the beginning. We’re going to see a lot more in this space.