There’s a (former) hedge fund manager called Martin Shkreli. He runs Turing Pharmaceuticals which bought a drug called Daraprim, and instantly raised prices of the drug from $13.5 per tablet to $750. The drug is more than 50 years old (so no patent protection) and is used to treat toxoplasmosis, which affects people who have AIDS, or some forms of cancer, and babies too. The price increase will dramatically increase their cost of care.

This has caused a major outrage in the US, with Hillary Clinton going as far as to say she will “lay out a plan to take it on“.

Shkreli isn’t a particularly endearing personality, and went on TV shows to say that he needed the money to increase research on victims of toxoplasmosis, even though many doctors claim the drug works well as it is. And that he thinks it isn’t his fault that patient’s debt will have to rise after his price hike.

He’s also been accused of attempting to influence the US FDA into not approving drugs of companies he shorted, using false claims and making money when the prices of those companies’ shares fell. A company he founded, Retrophin, had also bought rights to a rare kidney disorder treating drug and hiked the price by 20x. Former employees claim back-wages from him, another claims harassment, and he has been accused of using a previous company’s money to pay off his hedge fund investors. (Link)

Daraprim’s generic name is Pyrimethamine, which is available in India for as little as Rs. 3 per table. That’s less than 5 US cents. 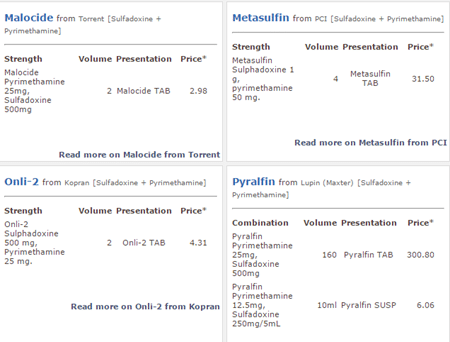 How does it make sense to increase the price of a drug that’s generically available anywhere? Because the US FDA doesn’t allow it unless your facility is FDA approved and the drug is approved etc. The FDA process is cumbersome, time consuming and costly. If Torrent, Kopran and Lupin above went for approval, even in an FDA Approved facility, they would take months to do it, and the cost would be heavy; and then, Shkreli can easily reduce the price of the drug back down to make it a waste of time and money.

As we write this, Shkreli has said it would make sense “to lower the price in response to the anger that was felt by people”. He doesn’t say that the price will come back to earlier levels, though. In that article he holds a grudge against the NYT, because they were the first the break his price-hike story, and says “I think our relationship is over”.

When drug prices go up, US consumers only ask if their insurance will cover it. If insurance becomes ubiquitous and covers everything, then drug companies can freely increase drug prices because insurers will have to pay, not patients. The incentives for insurers are that they know what their costs will be in case of eventualities, and that’s measured by actuaries to determine the price of insurance. If the cost of treatment sees sharp upward spikes, insurers will back off or raise rates, and that in the US causes political problems because everyone needs insurance!

The healthcare system is definitely broken – and while you might see Shkreli as evil, he’s just responding to incentives provided by the system. At some point, there will be more outrage – the articles linked above show many more cases of price gouging – and we can expect price regulation, like India, to break things down. Because at some point it’ll be difficult to allow a person to profit by letting another die.