Yay! We have a new way to buy gold. The Sovereign Bonds Gold Scheme has arrived, and I will call it Sobogos.

First, if you are looking for unbiased versions, please read the draft here. What follows in this post has a lot of snark.

So to save that, you are going to be convinced to buy Gold Bonds instead. SO that saves you from having to actually buy gold coins or bars, and you will still benefit from the increase in price of gold. And so India won’t have to import that much gold and so on. And you get a nominal interest on the bonds. (Take that! Can gold pay you interest?)

I do not know how this works because the mentality of the person buying gold bars or coins is apparently like this: I want to buy a gold bar or coin. Oh great, you have a piece of paper that is somehow equivalent! I cannot believe my luck! Said nobody. Okay a few, like the people who bought:

This then becomes the fifth thing you can do to buy gold but not actually buy gold.

But there’s one major difference: There is nothing backing it other than the government. That’s fairly good for me, but I have a a sneaky suspicion that a lot of these gold buyers have major trust issues with the government. And, to be fair, the government doesn’t trust them either.

But What Is It?

The exact details are not out but that’s the superstructure.

Does It Help Or Hurt?

There are two parties here: You, and the government.

If you buy this bond, you have pluses and minuses:

The government has them too:

Indians are Losing Interest in Gold, Though

India used to the largest consumer of investment gold (bars and coins) in the world. By a very large margin. China’s started to break into the space big time. Gold prices have been falling because Indians have been losing interest. Here’s the latest gold statistics: 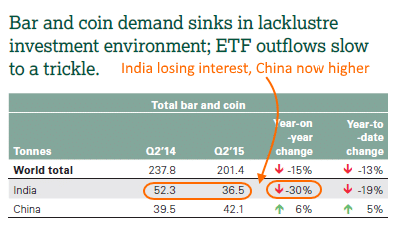 If the Chinese pick up their pace of buying gold, we might see the price of gold increase because of Chinese interest, but the drop in Indian interest is so huge that it is likely to take prices much lower.

But Will This Scheme Succeed? It’s So, er, Unattractive!

There is a saying: If you want it to look like a duck, make sure it quacks. Okay, that’s not a saying, I just made it up. But it’s true.

We have to learn from the movies. And from Arnab. Making stuff that even sounds like “SoBoGoS” or “Sovereign Bond Gold Scheme” is downright boring. You’ve lost people at “Sovereign”.

They should have had a nice catch phase for it. Like “Bharatiya Gold” Or “Humara Sona” or whatever. The bonds should have been in the shape of a gold bar – with the denominations written on it. Like this (my editing skills are terrible, but yeah) 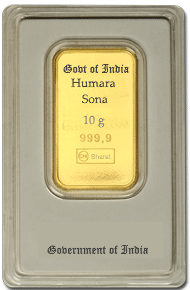 With all the terms written at the back. That might have a chance. The current scheme is so boring anyone would fall asleep just reading about it and then go to a  jeweller and say ditch man, give me the real thing.

The 1-2% interest is of little use really. But they should spice it up.

There are other issues

If a company buys gold and gets an exemption for tax, it will still have to pay MAT of 20%. If MAT is extended to LLPs and individuals, this can be a real dealbreaker.

Any level of KYC means that the poorest will not get access. These are a good portion of people that buy gold because it’s so much easier to hide away wealth from prying eyes.

Our Verdict: It’s Better Than an ETF

Having a tax protected interest paying structure where the gold is safe is WAY better than an ETF where they charge you 2% fees a year. So I expect most of that traffic to move to the government bond, though ETF interest has fallen.

There is little fiscal impact though they might save on cash flow for the time being. They could use that money for ads.

There could be a good CAD impact if its successful.

It will never be successful if it’s called SoBoGos. Seriously guys, you won an election with PR, please don’t behave all corporate and all. Find your inner Arnab!

This is basically a bet on Gold and the supreme trust in the Indian government. Both. If you believe gold will go up, or you’ll need to buy some at a later date, and you don’t think our government will become like Zimbabwe or Argentina, then this is the best instrument to buy gold. Period.

Disclosure: I have no interest in gold. I don’t wear it, eat it or own it other than some sentimental things that are worth way more than what the metal will ever sell for.