For all the talk of the lower prices of crude, India’s crude input costs have dropped significantly: This should have been excellent for us, because despite the rupee depreciation (from 61 last October to 66 now) is still a 45% drop from last year!

But it’s not really reflecting in the price of petrol in the country. And by that I mean the difference is quite substantial. In Delhi, Petrol prices are down just about 10% from October 2014 (when crude fell) and Diesel a better but still much lower 25% off. The Difference in the fall in crude prices versus what we have seen in petrol/diesel is largely the increase in excise (and CVD) on petrol and diesel. The government collects approximately Rs. 8,000 crores per month on the average increase in duties on fuels of about Rs. 8 per liter.

What does this do? Removes the fuel subsidy which was largely used to keep the fuel prices for Indian consumers LOWER than should have been done so that we don’t pay more. But this distortion was complained about by everyone including the RBI, saying the subsidy doesn’t help and should be removed. After it has been removed, however, the increase in taxes has created a similar distortion in the other direction; prices haven’t fallen as much.

The fiscal impact now is:

This should have been a huge boon for the government which should be able to spend its posterior off. Built bridges, roads, streetlights, power transmission, cheap housing and all that. But looking at government finances this hasn’t been that much of a boon.

A good portion of India is private consumption. In fact nearly 65% of the GDP Comes from there. A recent conference by the Finance Minister talks about the private sector not investing enough. One of the reasons they are not is because a good portion of their costs depends on fuel prices – transportation, electricity (when generated through diesel) and so on. Prices of plastics and tyres and compounds are slowly falling now, but in general price cuts take a long time to filter through because people just hate to cut prices other than in vegetables (where the public is okay with prices changing often up and down).

The problem with the lack of “transmission” of crude prices is that the private economy does not benefit that much. In this case, the government is not upping spending either. (ostensibly because the fiscal deficit will widen) If that’s the case, there will be little private consumption growth as incomes stagnate as inflation recedes. Private consumption will grow if input costs reduce and at this point the cost reduction in fuels is held back by the government raising duties.

Similarly, we tax input steel even more, making steel expensive locally, to protect the steel industries. In effect it’s a higher cost for us, relatively, while the beneficiary is the collective (higher government tax collections).

As of July 2015, for the four months in, and corporate income taxes are up just 6% from last year, and personal income taxes (typically TDS) are down 4.5%. (This is largely a reflection of income – and remember that corporate taxes were actually increased this year – so you can assume that incomes are flat or down).

Notice how incomes – a reflection of which is in lower income and corp tax collections – are lower while indirect taxes (a reflection of a higher taxation regime with the increase in fuel taxes) are up in terms of collections.

Is it a wonder why we aren’t seeing the private sector investing?

Oh and Which State Are You In?

Just to end this saga on a slightly positive note, my favourite state of Goa looks even more attractive to move to: 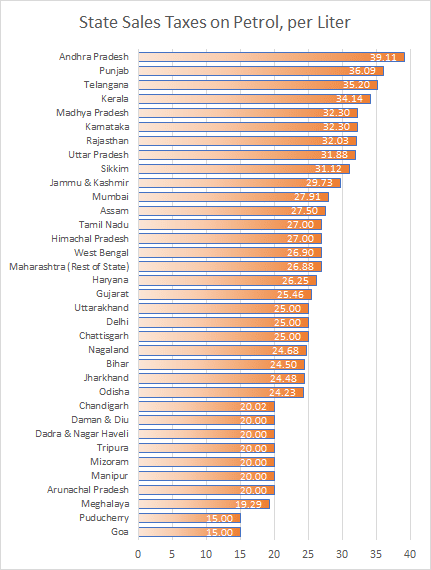 Note: All Data from PPAC and RBI.