The Senior MD at Amtek Auto, John Flintham, was on ET Now for a clarification of what the situation was:

So what he’s saying is:

Talking To Lenders? Of Bonds?

According to Flintham they are having “negotiations” with bondholders. But Economic times reports they are unlikely to budge:

More than 80 investors, including Axis Bank, Karur Vysya, Syndicate, Corporation Bank and some pension funds, stare at a knock of at least Rs 800 crore in their books in the September quarter as beleaguered Amtek Auto may fail to reschedule its payments, four people familiar with the development said.

Investors are unlikely to yield to the company’s requests for a reschedulement since high networth individuals and pension funds also own a substantial sum of the bonds which are maturing this month, said those people, who did not want to be identified. “They are asking for a restructure, but it won’t be possible given that there are more than 80 investors,” said a banker who did not want to be identified. “There are just about 10 banks owning the bonds, so they can’t determine what should be done.”

One of the bond holders is JP Morgan AMC, which proxy holds the bonds for a ton of investors, one of which is the startup Oyo Rooms. Those investors can’t even exit; only 1% of their units per day is allowed to be sold, largely because of the 800 cr. bond of Amtek Auto.

If they’re hoping to negotiate, that’s going to be a very very tough call. JPM AMC owns like 25% of that portfolio and unless they pass it over to their bank or such, they will not be willing to stretch the lending forward.

If They Default: There *are* cross default issues

Typically large bond buyers will ask that if a company has issued multiple bonds (Amtek has about five different NCDs currently running) and it defaults on ANY of the others, their bonds will automatically be in default. The idea is that if you don’t pay anyone else, then we’ll assume you won’t pay us either and therefore we will take our share from your assets.

While Flintham clearly said there are no issues if they do default on this bond, this is not at all the case when you look at the underlying documents. In the shelf document for their last few NCDs, it’s written that, uhm, a default on an earlier bond can trigger subsequent bond defaults: 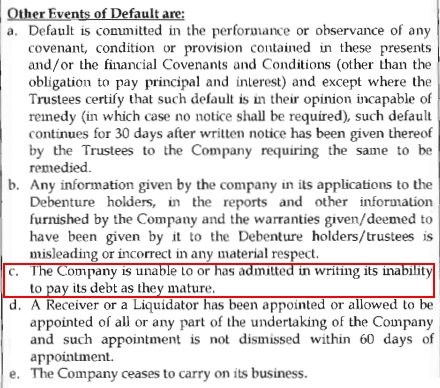 Regardless of what Mr. Flintham said, the agreements will supercede them – and they seem to be saying there will be a cascading default. (It remains to be seen if the other bond holders attempt to enforce it.

Plus, Axis Trustee Services has announced that Amtek Auto hasn’t appropriately pledged assets to the latest bondholders. They were supposed to create a “charge” on existing assets, but they haven’t got a no-objection certificate from existing shareholders.

Credit Rating Agencies: All The Same?

While CARE is being blamed for taking the Amtek Auto debt from a AA rating to “no rating”, it’s not like they’re the only guys in town who were caught helpless. Even CRISIL has this very bond (the September 20 maturing 10.7% Amtek Auto bond) in the “Crisil AA Short Term Bond Index” till May 2015:

In the last hour of trade Amtek Auto went up vertically – in fact, immediately after the interview. Starting from 32, the stock went to 55+ before settling back down at around 46.

At this point, though, the main issue is the Rs. 800 cr. bond repayment on September 20. If that doesn’t go through, Amtek Auto is in a lot of trouble. If they do pay, then expect another “rip your face” rally in the stock.

They’re likely to have to raise money to pay the loan back – it’s a huge Rs. 800 cr. No one from abroad, after seeing what the promoters have done to Castex shareholders, will want in. It would be quite strange for someone in India to just lend considering all this drama. The Amtek Auto case is definitely not over!