This Amtek Auto story continues to worsen. First, it fell 60% when it was removed from futures and options, and earlier, downgraded. And then, two JP Morgan AMC short term debt funds that held about 200 cr. of its debt saw a fall in their NAV and cut redemptions to 1% per day.

On Thursday things REALLY went wrong, and the stock fell a further 36% from there. (it’s down another 8% today) Foreign Investors Sold, But Not All Of It

Two investors, Barclays Mauritius and Swiss Finance, sold about 40 lakh shares yesterday according to bulk deal data, at Rs. 36 or so. They apparently have dumped shares in the market, and with the stock still in F&O (it’s going off at the end of the month) there are no protective circuits. Barclays is probably just a front for other FIIs.

Foreign investors still own a tremendous chunk of the stock. The last shareholding pattern (from Capital Mind Snap!) shows that Swiss Finance and a few others own significant stakes – FIIs still owned 18% of the stock as of June 30. Swiss Finance had 60 lakh shares alone, and the others haven’t yet shown up to the party. 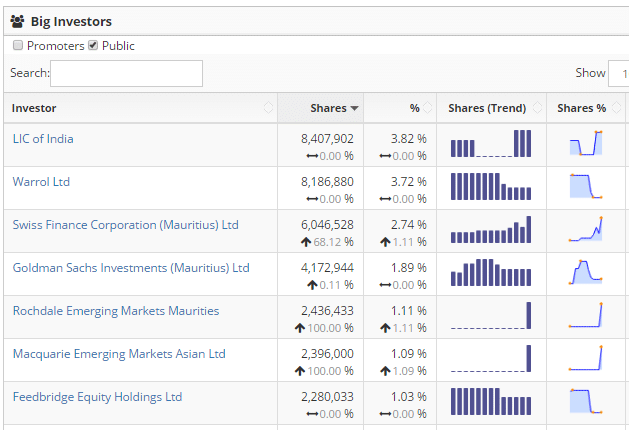 Why? Will This Continue Forever?

If you remember GTL, Suzlon or some stocks like Ackruti City, they also fell a huge amount and we wondered if this was temporary, sorta like the Satyam issue. But GTL, after falling from Rs. 400, is at Rs. 10 now three years later. GTL is still a running business, btw. They were overleveraged and the business trouble took them down.

And for the why part: Yes, the stock is seeing business issues. It funded acquisitions through debt and now cannot make them work quite as well as they thought. While the auto ancilliary business is a good one, they aren’t doing well. There are serious corporate governance issues in the group (and that may be the primary driver for this fall).

In the horrible case of Castex, their owned and listed subsidiary, the stock went from Rs. 40 to Rs. 360 and then has hit a lower circuit since then. Apparently there were foreign investor bondholders that were forced to convert if the price was about Rs. 150 or so. They have complained that this is a bad practice, and its quite likely they feel that the stock was “shored up” just to make the forced conversion happen. (Otherwise the company would have to return the money as debt). They have been attempting to sell ever since but the stock has seen only 5% lower circuits and is now at Rs. 50 or so.

Other group companies like JMT Auto and Metalyst which are also listed have seen a carnage in their stocks. The issue could be a serious one of corporate governance which has lost shareholder faith.

The removal from F&O was surely a trigger. The stock would end up being in the “ban” period most of the time; stocks have a market-wide position limit (MWPL) that is a limit based on the free float of the stock. At 95% of that limit, the exchanges does not allow fresh positions; only current holders can unwind. If a stock has low non-promoter holding, the triggers are hit easily. Business Standard has a piece on how this can be used to manipulate the stock:

It is easy to rig shares with such low floating stock, as trades in the F&O segment can be done by paying only 20-30 per cent margin money. Once the stock is in F&O curbs, the operator starts creating a demand for shares in the cash segment, as there is no fear of any short seller in F&O after he had managed to get the counter under curbs.

Consider this – stocks like Deccan Chronicle, Videocon, Orchid Chem, Suzlon and Kingfisher Airlines have seen such behaviour, and the subsequent price crashes in many of them have become an integral part of stock market history.

If the stock’s being manipulated and this is an “unwind” then there’s a lot more damage the stock can see. If there is a business issue – the company reported losses in Q1 – there is a larger problem that their debt is unsustainable.

Who Else Is Affected?

Apparently JP Morgan AMC was the only one holding Amtek debentures, but their balance sheet shows more than 5,000 cr. of debt. About 2000 of this is in External Commercial Borrowings (ECBs) and there’s a fair chunk with banks. The bankers must now be wondering how to deal with this. No shares have been pledged yet, by promoters, and let’s hope they have been able to do enough diligence to have detected if there was any “siphoning out” of money.

I was on ET Now two weeks ago (during the first fall) when I said that trading this stock is like playing with fire. That thought remains. If you have money you don’t mind losing entirely, then this is like a lottery ticket – you’re most likely to lose it all, but if you win, you win big. Otherwise, unless there’s incredibly positive news, this stock looks like it is heading further down.

Disclosure: No investments in the stock or subsidiaries, personal, company or associates.