RBI did not cut rates today, like we had expected them not to. There was no reason to cut, and in fact more reasons not to. What the RBI said was:

No one expected them to cut rates, and they did not. That sums it up.

Isn’t there more? Aren’t you supposed to analyze everything like his hand movements and all that?

Get over it. There isn’t anything big.

Inflation’s been going up. Rajan said this today in the policy statement:

Headline consumer price index (CPI) inflation rose for the second successive month in June 2015 to a nine-month high on the back of a broad based increase in upside pressures, belying consensus expectations. The sharp month-on-month increase in food and non-food items overwhelmed the sizable ‘base effect’ in that month.

We mentioned this in Macronomics (Premium only) yesterday, with this graph: 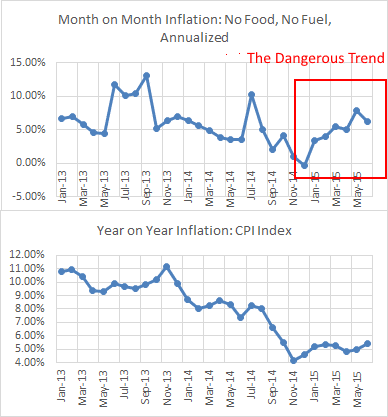 What this shows is that month-on-month, inflation’s been rising and when this “base effect” of lower crude prices is over (Post October 2015) we might see inflation actually begin to rise.

That’s not good news, at all.

Well, let’s tell you a secret. It didn’t matter that the RBI didn’t cut rates. Because a rate cut would be about cutting the overnight borrowing rates of banks. Banks , though, are not borrowing from the RBI overnight.

They are keeping excess money with the RBI overnight.

In fact, a whopping 76,000 crore rupees was kept with the RBI yesterday. This is the highest in two years. Here’s the overnight and short term borrowing system between banks and RBI: 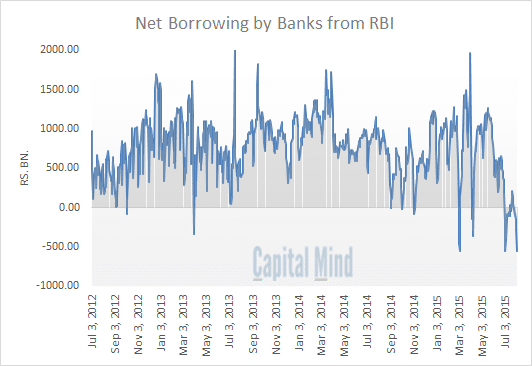 Banks are choosing to park cash (at 7.24%) with the RBI instead of lending money out; that in effect tells you why the rate cut was useless. It’s not that banks can’t get lower rates of borrowing, it’s that they are refusing to lend.

That was why this rate cut expectation was simply overblown.