China’s Index is falling again. After a 6% day yesterday, it’s down another 5% today. 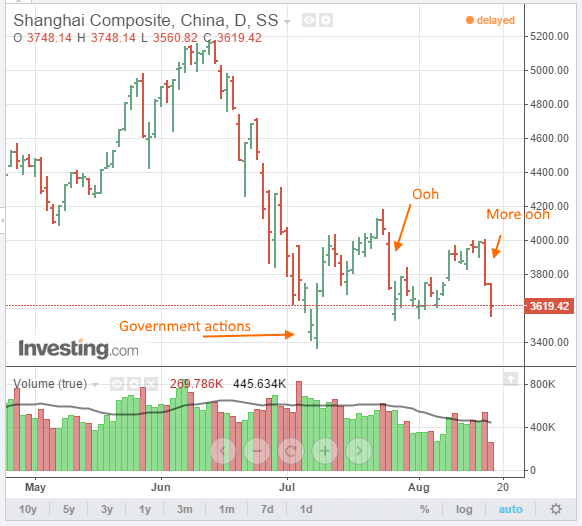 The number of traders with more than 10 million yuan ($1.6 million) of shares in their accounts shrank by 28 percent in July, even as those with less than 100,000 yuan rose by 8 percent, according to the nation’s clearing agency. While some of the drop is explained by falling market values, CLSA Ltd. says China’s rich have taken advantage of state buying to cash out after the nation’s record-long bull market peaked in June.

Well, that’s what they will do, if the government decides to buy stocks. The government has prevented holders of more than 5% in companies from selling till November, and when November comes there will be yet another round of selling. The companies that were routed in the earlier fall decided to halt trading to hold the fall, and when they returned to the markets, they have been punished too.

The point is: a market will go where it has to go. You can attempt to stop it through artificial restrictions, or buy up the stock yourself, but in a case where you need a good solid operational market, it will fall to where the selling will meet with enough buying to sustain the price. And that could still be 30% away.

However, after the unprecedented efforts of the western governments in adding liquidity to propel markets, I will agree there’s that one thing they can do to administer a multi-year steroid for stocks or assets: add liquidity. But as China’s finding out, when the music stops, people run out the door.