Today we explore the options market in some detail. AP has been providing some excellent trading knowledge on the #options channel on Slack, and we’ve seen some incredible moves in recent times. Here’s a couple of trade ideas beyond the discussions there, that we’ve noticed that has been interesting.

The Exploding VIX: How To Deal With It?

Volatility went through the roof recently. India’s volatility Index (read more about it here) spiked up to over 28 after a period of being stuck between 15 and 20.

We haven’t seen such a huge change in VIX since, well, since the May 2014 elections and before that, since the drama in September 2013, when the rupee crashed to 68. 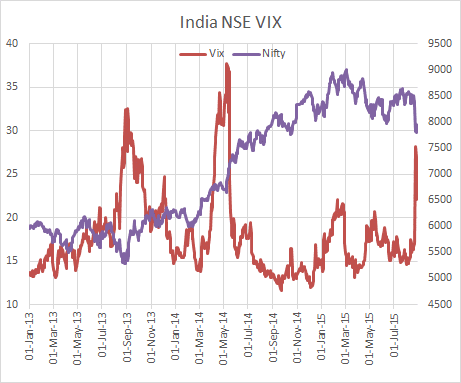 The change in VIX brought about an interesting set of strategies that one could use, and then, it hurt a lot in other instances.

• People who wrote straddles and strangles – and there are many of these – saw a hit. Given that this was an expiry week, the simplest idea would be to believe that the Nifty would stick around near the 8400 mark. Writing a Nifty 8400 strangle last thursday, when the Index was trading around that level – an exact week to expiry – would give you a premium of around Rs. 200. But on Monday that expanded hugely, and on expiry, closed at about Rs. 550 (only the put, the call expired worthless). If you were writing this straddle, you would have lost substantially (you would take three more months to recover, at the same rate!) And there are lots of people writing strangles.

• Covered calls were hit. While the calls lost money , the underlying positions took a toss. Remember that you get downside protection only to the extent of the premium collected – and anything further is your loss.

When volatility spikes it is actually better – and less risky – to write rather than buy options. To give you an example, the 7600 put option, expiring on Thursday, spiked to Rs. 90 on Monday after that massive 5% down day.

But there were only three days left to expiry (Thursday). The put option would expire worthless, unless the Nifty went below 7600. If you wrote this option you were protected till a Nifty value of 7510. 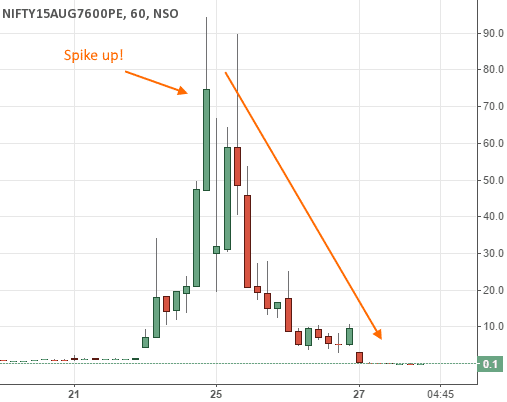 Even if you went short on the puts at Rs. 60, the value of it just kept going down, and was fast heading to zero. This is because the downside didn’t continue fast enough – the nifty gyrated a lot; it rose to 7880 on Tuesday, fell back to 7791 on wednesday etc. But you can see that the trend in the put option was just down – a high implied volatility (or time value) causes the option to decay very fast if the momentum subsides and that’s what happened.

(Don’t try this with September options though. There is enough time left on them – nearly a month – for them to see massive movements in the option values. TIme value is a function of a) the time left to expiry and b) the volatility expected. In the earlier case, a) was in the writer’s favour, since time was very little, so even if expected volatility was high, it would have to counter the drop in time remaining very fast)

On Monday, I mentioned on Slack that there was an interesting trade. With IVs spiked you would say that:

• writing a straddle would be great! The August Expiry 8000 Call Plus Put option were providing Rs. 200

• That means for Nifty, you would be profitable if the Index ended up between 7800 and 8200

• To cover that risk, we can buy a September Expiry Call Plus Put to Hedge. This was available at a premium of Rs. 430.

The position had many ifs and buts.

1) If the Nifty ended up close to 8000 (which it finally did) the position was profitable. The September options would still hold a reasonable value, while the August puts and calls will go their intrinsic values. At say 7900, the August straddle would trade at Rs. 100 and the September one would still be around 400, given the time value left for a month. The net position would yield Rs. 300, which is a Rs. 70 Gain. This gain would be the highest at Nifty of 8000.

Note: You can use OptionsOracle to simulate this behaviour.

The state of panic wasn’t quite as bad as to imagine 3) above, which is our worst case. So I decided that it would be worthy to take the risk of the 30-40 points, versus a target gain of Rs. 70.

The net amount received (September minus August) is Rs. 314. Remember, we put in Rs. 230, four days earlier, which means we have a fairly good net profit of Rs. 84.

Writing Options: There’s a time for them

Having a position that setup a risk-reward in our favour was what clinched the deal. The thing to learn is:

• Volatility can be your friend, and using options you can even limit your losses (we chose a calendar spread)

• Time value decays very fast when volatility expectations spike. So if markets just slow down – not even reverse – writing options will make money.

We’ve had long lean times in volatility, where the option prices were low because the expected volatility was low. When that begins to come back up will be a time to consider writing options as a m
ore effective strategy.

Note: Doing this on stocks can be far more risky. Stocks are inherently more volatile. While the Nifty went up 2% today, the biggest stock in it, HDFC, went up 7%.