I don’t generally write about ULIPs but once in a while it’s useful to see how bad these products have been. We wrote a long post about HDFC Crest which was being missold by bankers as if it was a fixed deposit.

Now there are many reasons why the ULIP is a bad product.

But Just Compare Returns, No?

Forget all the fees and all that. That’s highway robbery and terribly disgusting behaviour but what you can do, these are relationship managers with targets who don’t give a damn. One day, banks will be classified as brokers and we’ll get our day in court. Meanwhile, let’s see how bad the performance of a ULIP is.

If you take the same HDFC Crest for the last five years and compare it with a tax-saving fund from the same brand- HDFC – you will find the comparison simple. NAV or Net Asset Value Per Unit is simply how your corpus has multiplied over years. 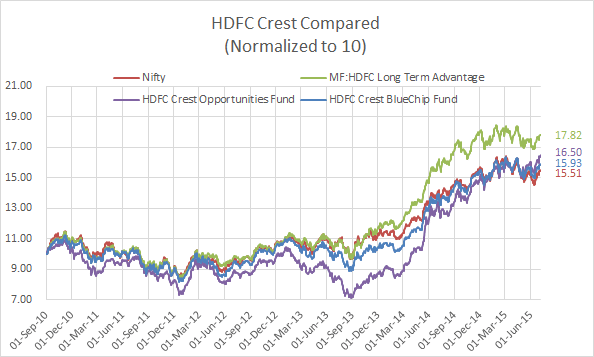 Agents will tell you – but we give you insurance. Sure but the insurance is cut from  your corpus (not the NAV) and you can get a way better deal by using a term plan instead. (The post has the calculations)

If you were missold this policy the least the insurer could have done is at least make it up through performance. But No. Just do not buy ULIPs.