Let me introduce you to this chart: 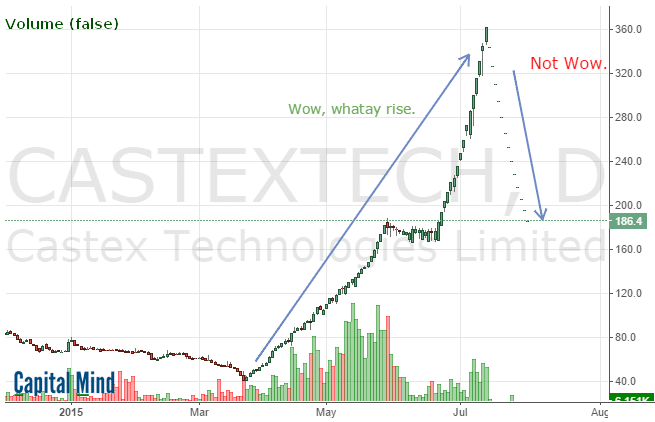 The company is in the auto component space, and used to be called Amtek India. It’s still promoted by Amtek Auto, which is a listed company but that share is not doing anywhere close to this kind of move.

Why did Castex Rise and Fall?

Castex has a large FCCB issue due for maturity in April and September 2017. This adds up to about $200 million. The FCCB converts to shares at Rs. 103.005 per share, and if the share price is lower, the FCCB holders will not convert and instead, demand their money back.

Instead, now, they’re converting to shares and then apparently attempting to dump shares on to the market. There aren’t enough buyers and so the share hits a lower circuit each day.

In June, Foreign Investors converted 2.9 cr. shares and reduced the FCCB outstanding to about $140 million. You can see how the share rise went “flat” in June as the Foreign holder would have tried to sell shares.

The rise is not explainable easily – it rose on steady volume and regularly, with a 2 to 3% rise every single day until the volume just vanished. We have no idea why the stock went from 40 to 360, a 9x rise in three months before completely collapsing.

Will SEBI Investigate? Or at least, remove the circuit?

Such stocks which continuously hit lower circuits, give no exit to an investor. If you were suckered into buying this stock, you have no way to get out even if you want to book a loss. The stock simply has too many sellers and there is nearly no transaction.

Why not open this out for a sale on one day without a circuit? Let the stock price go where it has to – and it will eventually settle to where they should be. After three down circuits – which are meant to stave off panic – you realize there is something seriously wrong and the stock should be given leeway to move until it finds buyers.

Note: As the stock came into our algorithm, I was briefly an owner of this stock, until I realized there’s more to this than I care bout, so I exited the position at a small profit.

Secondly, will SEBI investigate who was involved in moving this stock from Rs. 40 to Rs. 360? Was there circular trading that intended to move the stock upward? It is such moves and then the lower circuits that scare away investors from markets, and we need a strong regulator to go in there and force the right behaviour, and curb manipulation. SEBI has greater powers now, and this is the kind of thing SEBI should be using it for.