We spoke earlier today of using the PCR (Put Call Ratio) with open interest on individual strike prices to get to a tradeable scenario. In yesterday’s “textbook” trade, we see Abhijit Phatak (@ap_pune) show us how we can use the PCR for good identification of trade setups. (Click the image below to view, or https://youtu.be/O-0e9f5N7d0 ) 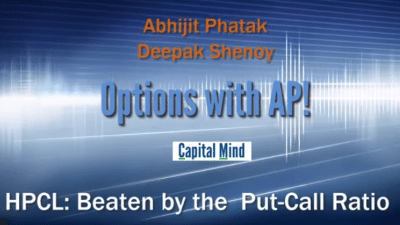 To repeat what happened:

The HPCL situation, one day prior (Tuesday’s close) was like this:

Note: You have to be confident about liquidity. For example the HPCL 940 Put had only 4500 shares in OI, that’s less than Rs. 1 crore in exposure! That is usually too little – but in this case it was confirmed by the 920 PCR being low as well. We would suggest that this be paper traded for a few weeks before real money is placed on it.

HPCL ended the expiry day up a little, but remarkably, exactly at 940, having bounced off the 920 low where the PCR had been above 1.

In many other stocks, especially in results, there wasn’t that much that PCR hinted to us. Some stocks had results today like ITC (up 4%), Dr Reddy’s (up 6%) and Bank of Baroda (up 10%) gave us no sign of “abnormalities” in the PCR at all.

In one case: Bharti Airtel the market did show signs of saying that Bharti should rise to above Rs. 420, since the 420 PCR was higher than 1.

This was the case through the day too, but Airtel refused to budge and closed at 416, meaning the PCR strategy failed.

Over at slack, AP mentioned that the strategy can’t be primary one, it’s just a starting filter. Eventually the stock has to show signs of moving into the trend – with HPCL there was some exhaustion visible, but there wasn’t a sign of bullishness with Airtel. (Though Airtel did go above 420 and reverse back from there, intraday).

• The PCR isn’t fail proof – the stock has to tend upwards as well.

• The PCR will give you a great lead into where supports and resistances lie, closer to expiry.

• You have to track the PCR on an intraday basis as well as things can change from a previous day close.