CARE has downgraded JP Associates‘ rating to D, which means that according to CARE they are in default, or very likely to default.

The revision in the ratings of the bank facilities and instruments of Jaiprakash Associates Ltd (JAL) takes into account delay in servicing of debt obligations by the company due to its weak liquidity position.

But What Do Rating Agencies Know, Huh?

The biggest problem with rating agencies is that they react late. Typically a big problem is that they are paid by the companies, not by the buyers of bonds or lenders of loans, to rate the facilities. This means if they cut the rating down, they could lose revenue. Also that they are aware of the consequences of a downgrade – that because they downgrade a company’s loans, it can make life difficult for that very company to borrow any more money. (Will have to pay higher rates as borrowers will require a lower loan)

CARE in particular has acted very fast in one other instance we know. In Capital Mind we mentioned how CARE had downgraded Deccan Chronicle to default in June 2012, when they had defaulted on an NCD payment. The rest is history now, and has ended in a massive Rs. 4,000 cr. default including the loss of the IPL Team (Deccan Chargers) and the arrest of their CEO.

When CARE downgraded the company, DCHL’s shares traded at Rs. 33, and took about a year to fall to near zero.

If the past is an indication, this could be a pretty big thing. And JP is about ten times the size of Deccan Chronicle, for the banking system.

Firstly, the shares are in deep doo-doo already: 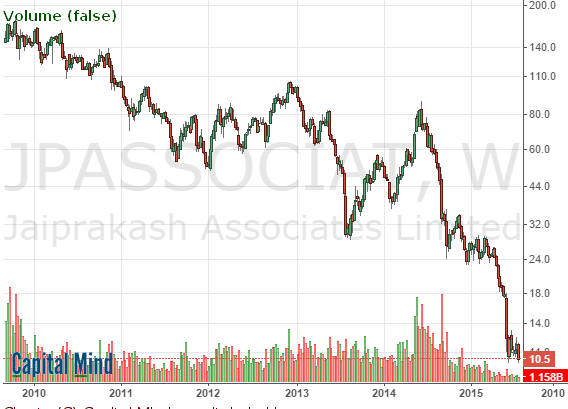 So if lenders hold the shares, they’re probably screwed already. JP’s promoter holding is 40%, around 100 cr. shares of the 243 cr. shares that JP Associates has. Even if they liquidated all the shares at the current price they would get just Rs. 1,000 cr.

And apparently, that won’t even cover the cost of talking about it.

JP Associates itself has over 60,000 cr. of loans in the consolidated entity, and as a standalone entity, over 22,000 cr. (Source: Latest Balance Sheet)

The downgraded facilities and non-convertible debentures add up to about Rs. 29,000 cr.

This is fairly large; of course not all of it will be gone, as JP does have assets to sell. But when people know you’re desperate to sell, there’s only one direction for the asset’s price to move: down.

The biggest lenders to JP are: ICICI Bank, IDBI and SBI, according to Nomura. ICICI has a 12,800 cr. exposure to the JP Group in total; and 7,900 cr. exposure is significant for a smaller entity like IDBI.

The next step for a JP Associates would be to build confidence by actually selling assets and repaying loans as they come due. Any delay may not result in an NPA (which is allowed 90 days) but the fear will certainly grow if there is a delay in paying either principal or debt. Where JP goes from here will depend on how fast they are able to sell assets – and in the current time, they’ll probably get a lot lesser than they expect, as commodity prices are down and no one really wants to buy all that cement capacity when sales are shot. This might just be the bane for markets.