There comes a time in every country when you find the stock markets tanking and every regulator decides it’s their responsibility to bring the markets back up. This time it’s China. After their stock market fell 30% in less than a month, regulators have begun to see the fall as a huge problem. Even though they didn’t complain on the way up: 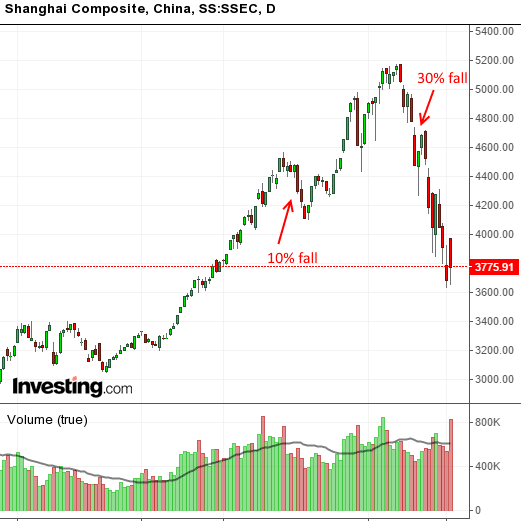 The fall is probably a result of way too much leverage driving the markets. Chinese investors – and they are a majority, with only 3% foreign participation in mainland indexes – borrowed up the wazoo to speculate in Chinese stocks, which took the markets up huge. At one time, there was an IPO that went up 10% limit, for every single trading day for nearly two months. That’s a whopping gazillion % return (fact: Your mind turns to jelly after about 300% in two months, this is much much more. You would be quite happy with just 30% out of that lot)

Since then, at some random point, the Chinese story stalled. Perhaps it was the lack of inclusion in the MSCI index, and perhaps it was something else. We can’t put a finger on it, but the money started to leave and started to leave really fast. Result: We’re here, at -30% in less than a month now.

The steps now being taken borders on panic. The Chinese Authorities have:

Even with that, as you can see in the graph above (the last bar) the market opened up 7.5% but closed up only 2% and that too near the close.

This, apparently was tried in the 1929 during the big stock market fall, by JP Morgan and a bunch of other brokers. (Source: Zero Hedge) 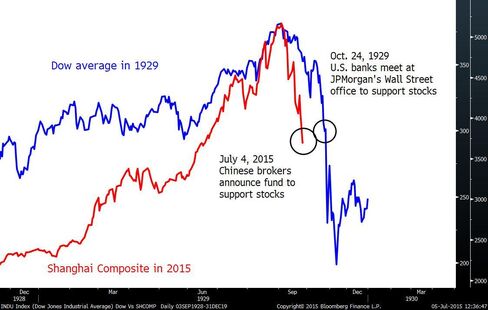 You can do anything with data of course, and note that the scales are different. However both times around, we saw 30% drops before such supports came by.

With the Greek issue temporarily moving to hibernation, the problem in China might just be an issue for global worry going forward. Let’s hope the rot is stemmed, but history tells us such intervention hardly ever works. And even now, China’s market is positive in 2015. There’s a long way to go!