Greece is back! We won’t bore you with the details but it seems there’s doing crisis level meetings (again) on the fact that Greece needs money, and it needs money to pay people it owes money, and they want Greece to die of starvation rather than not paying them, which is not acceptable to Greece, and so on. 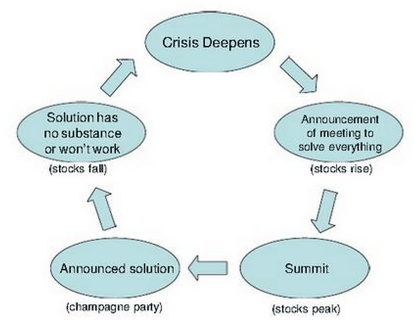 If you want a “You are here” marker, imagine a red dot running round and round this little circle. Currently it’s at the point where “Solution has no substance or won’t work”.

The best thing for Greece is to walk away from the Eurozone, but politically they have be thrown out as if it was the last option, otherwise the blame will be on Syriza. They now have enough support at home to ditch a deal that involves even a teeny weeny bit more austerity.

For the Eurozone there’s a big problem if Greece walks, because it is guaranteed to look good if it does. Because the economy will tank for a couple months, but come back very very strong in a year or two, and the Drachma will devalue substantially against the Euro, making it profitable for their exports. Even if the Eurozone agrees to take a hit on the debt it is owed by Greece (who won’t pay back, of course, that’s the whole point), the issue is that Greece then becomes an example.

An example of Iceland has already been there. They had a huge problem and refused to bail out their banks. After three years of currency barriers, they are now back and back so strong it makes the bailout countries look really bad in comparison. If Greece does the same thing, the next thing you know, Portugal, Ireland and Spain will demand that they too be allowed to default. When you’re in a hole with no way out, you might as well just dig deeper, especially if you know that others who did so managed to get out.

It’s getting that point. Germany says “No Deal”, it seems, with the Finance Ministry spokesperson Martin Jaeger telling reporters there’s a long way to go. Greece has apparently rejected the terms of the creditors that would let Greece get more money as aid so it could repay the IMF. These terms involve higher VAT, higher income tax, increase in the retirement age to as much as 67 in 7 years, and lower defence expenditure. This would most likely kill the Greece economy even more.

Earlier today, market participants got a whiff of it, just before the markets closed for the day: 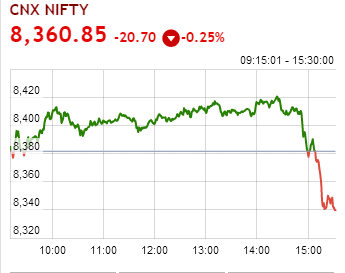