So Strides Arcolab was going to merge with Shasun. This merger was cleared by shareholders. Then it was cleared by the Competition Commission. And there’s some court meetings that have been done.

It needed an approval from the Foreign Investment Promotion Board (FIPB) which has, apparently, rejected the proposal. They needed this approval in order to issue shares of Strides to Shasun shareholders that were non-resident. Shasun has about 21% ownership by Foreign investors, which will, post the merger translate to just 5% of shares in Strides.

Strides has about 38% holding with non residents, and with the Shasun merger will probably see that come DOWN as a percentage.

It makes very little sense for an FIPB to even have a say in such a transaction; and this is strange, coming from a government that seems to want to encourage investment!

We’ve complained about the high-handed nature of the FIPB earlier. (Read the article)They have rejected a Sharekhan stake sale, deferred a Kotak Bank FII stake raise (re-deferred this month) The commerce ministry needs to make the FIPB far more transparent – they don’t even give a reason to us for the rejection! Even the company seems perplexed and are apparently awaiting a formal note from FIPB.

You can’t make in India with such rules. We have to free India from the clutches of bureaucrats, apparently.

Note: If there is a better reason to reject this kind of proposal, it should be specified. FIPB should only be bothered about things like national security or investment in sectors that are deemed “sensitive”. The pharma sector isn’t of that kind. And then, like I noted, the foreign ownership of the combined entity, in terms of percentage ownership, isn’t exactly going up, is it? Why, then, should FIPB even have a say?

What Happens With Strides?

Let’s hope they can re-apply and get this thing sorted out. However, looking at the fact that other companies have been delayed for a long time, this merger could actually be in trouble.

The merger would have been a big fillip for Strides, and an even bigger one for Shasun. For Strides, it means lower margins, since Shasun’s that way. It will also increase the debt of the combined entity from what Strides is now. However it gives them access to APIs and FDA approved facilities, and the smaller contract manufacturing and formulations businesses.

I don’t think the merger’s out of the question yet. That means there’s a good chance it will stilll happen, though it might take a bit more time. Strides has done well in the last year, and continues to look good YTD in 2015 even though it’s fallen 15% from the highs: 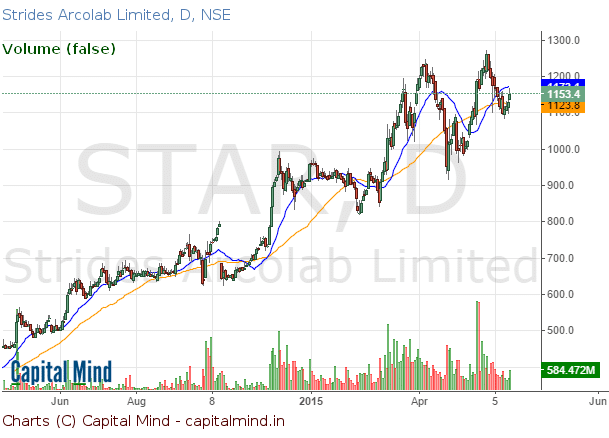 Disclosure: I own stock in Strides.