Cairn and Vedanta will merge soon, says a Vedanta Board Meeting note, where Cairn shareholders will get:

And that’s pretty much it.

Sit back and relax. Sometime in the March 2016 quarter. That is approximately the time of the next Greece drama, so I would not suggest immediate outrage. Though honestly I am a terrible person to be in the media business because there is no such thing as premature outrage in the media business.

But we couldn’t resist. So although the timelines are way out, the contours of the deal’s currently proposed structure is known.

Not So Great for Cairn Shareholders

There’s two reasons why Cairn shareholders will not be rejoicing.

One, that Cairn has a truckload of cash. Nearly $17,000 cr. of cash. This is all going to the debt ridden Vedanta. Vedanta – earlier Sesa Sterlite – has borrowed some of this money ($1.25 billion) at Libor+3%. (Source: Livemint)

Now they won’t have to – because the combined entity will own the cash. And Vedanta doesn’t have to pay the interest on the money. This strengthens Vedanta’s balance sheet and reduces its debt profile so it can borrow more. What happens to Cairn though?

Answer: Nothing. There are 187 cr. shares of Cairn outstanding. So the cash is about Rs. 90 per share. This would have been a cushion if Cairn was independent. Now, with the Vedanta merger that cash vanishes, and there is no cushion.

Second, look at the past history of the shares (on the same scale). For a substantial part of the last year, Cairn has traded way above Vedanta’s price. 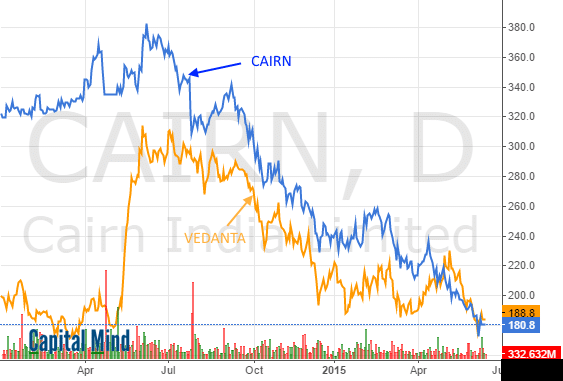 You get Rs. 10 more, at 7.5% a year, for 18 months. This is tax free, being a dividend.  Current tax free yields in the market are between 7% and 7.5% from highly rated companies (IRFC or REC) so a lower rated company like Vedanta would need to pay more. In fact if you got this preference share separately today, you might not pay Rs. 10 for it – you might say I’ll only pay Rs. 9.5.

And there is a risk. The money isn’t coming from Cairn’s coffers. The presentation says:

Meaning: we will pay you by borrowing from someone else. The concept of a third-party facility is that they don’t want to sequester the cash from Cairn’s cash pile – they instead will use that cash for something else, and set up a borrowing facility from someone else who will then pay the preference shareholders the Rs. 10 per share back.

This is fine, but we should expect a higher yield for this additional risk. A higher yield means a lower price, so the price of this preference share is probably Rs. 9 or even lower.

Effectively the extra you’re getting is Rs. 9. So, as a Cairn shareholder you get a share of Vedanta (which is currently trading higher at Rs. 182, has fallen now) + Rs. 9 on the preference share. This isn’t so much of a premium on the current share price, which has fallen substantially in recent days.

Vedanta shareholders, too, will have a risk. There’s a tax situation in Cairn. When it reorganized itself in 2006, there was some share transfer by the UK entity to the Indian entity, which, because of the retrospective tax applied in 2012, was deemed to be taxable in India. The tax department has claimed Rs. 10,000 cr. as tax, and another Rs. 10,000 cr. as interest.

This tax piece can wipe out the cash benefits of the deal for Vedanta (and thus, Vedanta shareholders).

It’s sitting in court, this bit, and like the Vodafone case, is going to be decided by a lengthy drawn out court process and possibly, international arbitration. It’s a silly case, and on merits Cairn should win, but you know how in India merit doesn’t always win.

Vedanta has said they have “recourse” to Cairn UK – in the sense that if they have to pay the tax, Cairn UK will reimburse them. This kind of contingent liability isn’t present in Cairn UK’s annual report and therefore it’s not really likely to exist. Cairn UK owns about 10% of Cairn India, and that holding has been “frozen” until this tax demand is settled this way or the other, but that wouldn’t pay even 1/5th the tax liability if the court decides against Cairn.

There’s two industries in the doldrums. Metals – which is what Vedanta does (Zinc through HZL, Aluminium through Balco, Iron Ore and Copper) – are in bad shape due to the downcycle in world markets, so prices are down. Crude – which is what Cairn produces – is down nearly 50%.

Recent results of both companies are horrible. Looking forward, unless the metal and crude cycle turns, these companies won’t really benefit.

There’s no real operational benefit from the merger. I mean you can’t really say that the technology I use in iron-ore mining will help me in the crude business. This merger will still have to keep the two businesses separate from an operational perspective. Put in management lingo: there is no “synergy”.

The tax issue is another trigger risk.

While there are many that will buy when the market is down (“Buy when there’s blood on the street”) I personally believe there is much more damage to come, and there are other industries (textiles/garments, chemicals, electrical equipment) that are likely to do better.

If you are a shareholder, add Rs. 9 to Vedanta’s share price, and that’s where Cairn should trade, if the merger goes on schedule.