The Nifty hits close to its lowest in 2015, with 8000 acting as a technical barrier on the way down. 2015 has now seen a big upcycle in Jan and Feb, and then a shift to a downtrend. We have now had five continuous down days. 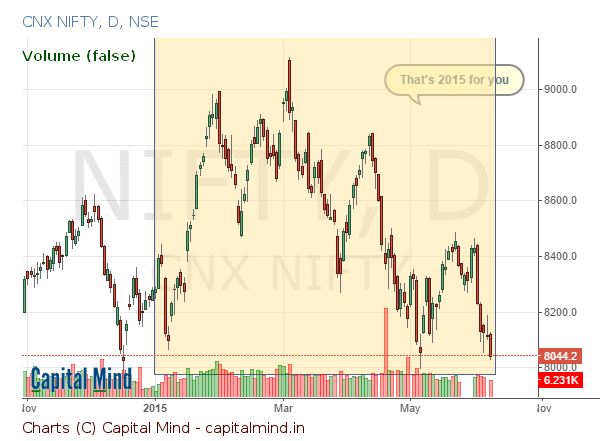 We have been saying in Capital Mind Premium that stocks have been overvalued for a long time, and that a correction isn’t going to be a surprise. The question now is: will we continue the downslide or does some kind of panic support kick in here?

Note that this time around, we aren’t seeing big volumes on the downside. Panic, which usually means the big part of the downside is over, is accompanied by large volumes. We could see a lot more, even through, in industry parlance, “thoda to bounce banta hai“. (Meaning: at least a small bounce should happen))