This is a guest post by Darshesh Thacker, who’s currently studying and interning at Capital Mind.

Since 1982, Indian households have spent many an hour over their favourite Maggi noodles. Glitzy advertisements year after year have managed to keep the consumers hungry and lured them into buying Maggi 2-minute noodles which made it an Indian household staple. However the last few weeks have seen a sudden turn of events with everyone doubting their beloved snack ever since the high lead content in Maggi controversy surfaced in the public eye. So not only has our evening snack schedule gone for a toss but also the financial stability of Nestle India.

The background: Maggi samples were found to have excessively high lead content in them, by government tests of the Maggi “Tastemaker”. The lead levels were apparently higher than the maximum permissible limits. This has since led to a ban by many states, and as the controversy boiled over, Nestle decided to take the product off the shelves.

So we decided to do an analysis of what this spells out for those who have been holding shares in Nestle, a firm whose earnings per share has grown steadily over the years. We also extend this to see how it matters for the FMCG sector in general.

How Big Is Maggi?

Maggi enjoyed an approximate 70% market share in the Rs. 4000 crore instant noodles segment.  Being the pioneers, the brand has firmly entrenched itself and faces slight competition from ITC Sunfeast Yippee(15-18%), Capital Foods’ Ching’s secret and similar other brands from HUL and GSK comprising the remaining 12%.

However with the recent happenings, fourteen states have gone on to ban Maggi including some of the big consumers like Maharashtra, Gujarat and Rajasthan. The others being Delhi, Punjab, Goa, Mizoram, Uttarakhand, Jammu & Kashmir, Tamil Nadu,Assam, Madhya Pradesh, Karnataka and most recently even Odisha. It’s a no brainer that the sales are going to take a big dent and thus the revenue Nestle generates out of Maggi take a huge hit as well. 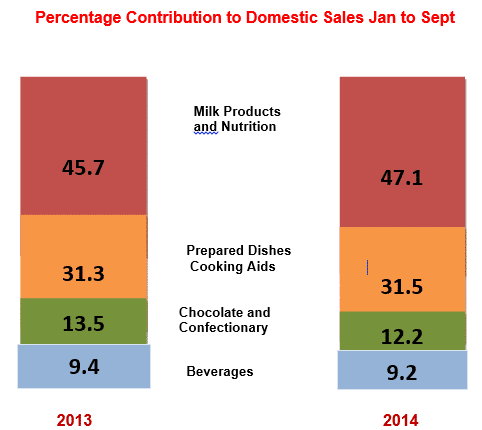 As shown in the chart , prepared foods segment has been the source of 31.5% of Nestle’s sales in India (November 2014 analyst report) along with Maggi being crucial in creating a premier brand value for the firm. So the drop in share value is pretty evident. We believe that this will take a period of time say 3 months for the firm to recover, moreover Nestle themselves have decided to withhold manufacturing Maggi till a clean chit is awarded.

At the time of writing the Bangladesh and Singapore testing authorities have cleared Maggi off any charges of high concentration of lead.  Hong Kong, too, apparently cleared the noodle mix.

Uttar Pradesh and West Bengal are the only major Indian states who haven’t yet banned the sale of the Maggi. In addition most major retailers like Big Bazaar and even the Army canteens have decided to withdraw the sale for the time being.

Facing collateral damage, the other noodles brands have also been called in for testing and thus the entire segment is likely to face a drop in sales until we see any affirmative regarding the tests from the government. However other players like ITC, GSK and HUL(6%) [D3] are far less reliant on prepared foods for their percentage sales. 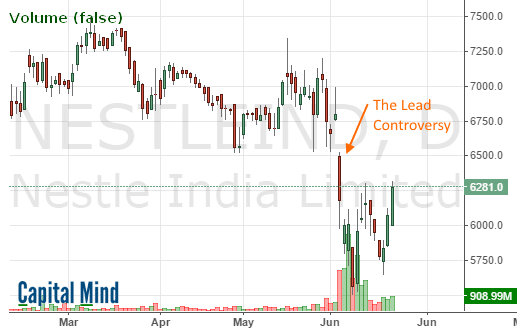 While the stock has retraced from the lows, it’s still well below the levels of Rs. 7000 that it fell from. There are other headwinds now:

The next quarter will see a huge drop in profits, and probably even losses as they will take a large one time hit. But Nestle’s woes may be temporary, as we will find other things to outrage about. The Indian mind seems to be fickle, moving from controversy to controversy, and needs a new thing to fight about every single day. You can see it visibly on TV shows such as the Shouting Match otherwise known as Arnab Goswami. If Arnab is truly what we are, then we’ll soon be eating Maggi and complaining about Rasna tomorrow, or drinking Rasna and complaining about Coke.

Nestle is a giant brand. It can’t fob off the problem – that its food isn’t exactly healthy as it is, as multiple tests have shown it to have a problem. The coming days will see it even more in the limelight as there will be more tests and possibly, damning evidence. The bet that our memory is short lived may be good for a shareholder. However, the news flow and the near term impact of this issue will be a major drag on the Nestle stock.