The crisis in Greece is apparently something no one cares about anymore. Someone’s bound to figure this thing out, we feel, because for goodness sake, this thing has been going around for the last four years already.

For years, Greece has been on the edge of insolvency. Initially markets were hugely spooked, at this tiny nation’s distress, because tiny it may be but the banks that held its debt were even more on the edge and a “default” by a nation would simply render them bankrupt. Which would have been a bigger problem.

The story of Greece would introduce heavy volatility, so much that we even wrote a satirical piece on it.

Since then, Greece has been bailed out more than once, and has seen severe austerity hurt its citizens. Having voted in a government that has promised to rework the deal and undo austerity, Greece is now faced with a European Union that simply will not listen because if it did, other countries would demand the same thing and that would kill the banks. The banks no longer own any of the Greek debt – the bailouts ensured they got paid, and the remaining debt seems to be held largely by the ECB and IMF.

Greece missed a 300 million payment earlier this month, and that is not a default only because it is allowed to delay it till the end of the month. There are more, though:

If they didn’t have $300 million to pay, they’re surely not going to have the larger numbers to pay these back. The only solution is a massive bailout by the ECB yet again. That agreement hasn’t come through because the Greeks don’t want the austerity the ECB demands.

The problem is that all of this stuff in Greece is denominated in Euros. They can’t print euros, only the ECB can. Therefore they cannot choose to just print and pay back, so they will only have to say “we’re done!”. That kills Greek banks (who will have Euro liabilities and their asset, the T-Bills and other Greek debt, will be gone). The failure of Greek banks is guaranteed unless there is a bailout.

If there’s a failure, Greece will have to pull out of the Euro and issue its own currency, the Drachma, instead. The Drachma will devalue hugely against the Euro. So if you’re Greek, it’s best to take your Euro currency notes and keep them under your bed; after the drachma, you will have something worthwhile.

Apparently, in the fear of stuff going really wrong, Greeks have withdrawn over 1.5 billion euros from ATMs in the last week. 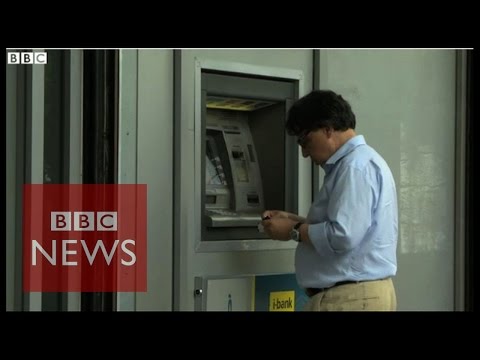 And we had said last year that:

The best thing to do is to get out of the Euro and default on the past loans (or to pay in their own currency after it is devalued tremendously). That will guarantee a recession but also guarantee a recovery within five years – like Iceland. Currently it seems like Greece is sitting frozen in a foetal position waiting for something, just anything, to happen.

A year later, they’re still in that foetal position, but something is going to happen by next week. The effect in India isn’t yet visible, but we can guarantee that prices will be volatile. (Note: I can get away by saying that statement at any time, and I’ll always be right.)

India will see the impact in foreign fund exits, though. In the recent week or so, domestic institutions have picked up their buying substantially while foreign investors exited. This has kept markets buoyant, but a Greek situation might change the pace of exits. But this is better done with now, otherwise every year we’ll have some more unexpected dra(ch)ma.