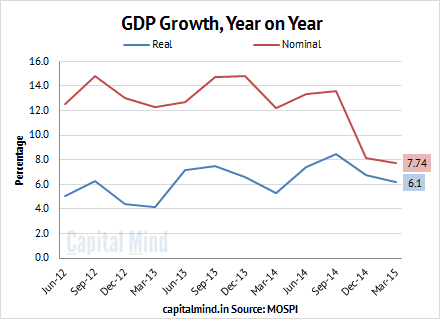 In fact, the 7.74% nominal growth number is the one to watch: It is much lower than the nominal growth in previous years (measured by the old method, which would been even higher if the new method was used) The difference: Apparent lack of inflation.

India’s data uses the wholesale price indexes which have shown low to negative inflation. (Consumer price index numbers have been above 4% for the most part). It’s quite likely that real growth is even lower if you used consumer prices to “deflate” the nominal change in GDP.

The GDP deflator (the factor by which nominal turns to “real” growth) is at a very long term low of 1.5%! (Note: We have fixed the error in the number reported earlier) 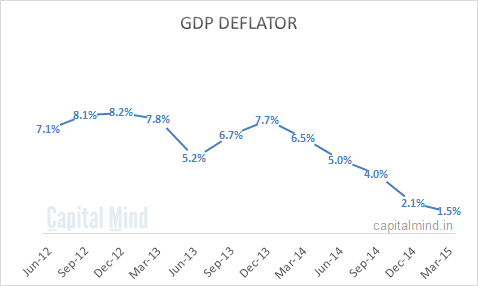 India’s never really seen a bout of low inflation. This time, it happened because of lower crude prices, but in general prices overall have fallen. What this means to us is:

In general, we believe India will have to adjust to a lower growth rate, going forward.