The current account deficit for the March quarter of 2015 came in at -1,286 million, which is a big relief, even if it’s marginally higher than the deficit we saw in the year earlier. It’s a tiny number in comparison with the massive CAD figures we have been used to seeing. 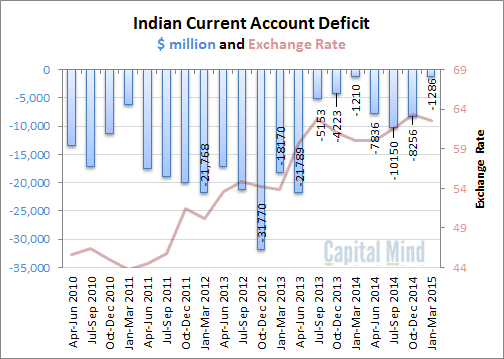 It is of course useful to see this as a % of nominal GDP, where the deficit is just 0.2%. 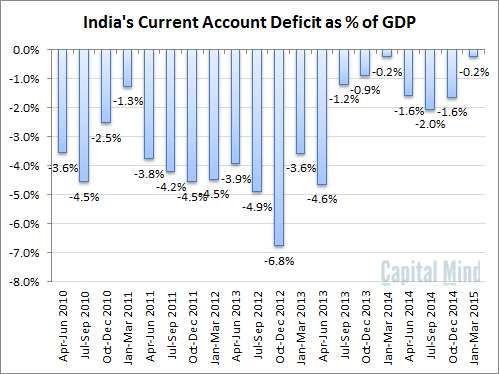 In brief, the current account is money that flows in (or out) of the country to do stuff that is not:

Everything else is the current account, including: Merchandise Trade, Services trade, Interest that Indians pay to foreign entities, dividends paid or earned, remittances made from abroad and so on.

Well, this time it’s been a huge booster that we needed to import less oil in terms of dollars. The crude price crash has helped merchandise imports fall, but we have also seen exports fall due to sluggish worldwide demand and drop in price of our oil exports.

The biggest things in the current account are – the Goods Trade (usually negative), Services trade (Positive from our software exports), Other income (negative since India’s a net borrower and pays dividends and interest), and remitances (called Personal transfers, positive since we are the biggest receiver in the world). 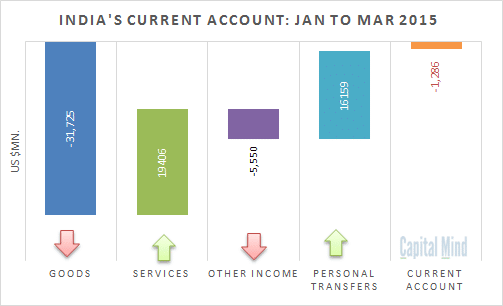 The Balance of Payments:  RBI Buys Its Backside Off

Once you have the Capital Account, how is it funded? Some of it is rupee depreciation. But most is financed through FDI, FII flows (foreing investors), NRI Deposits and other sources such as Trade Credit.

We can see here that the RBI had to buy a lot of dollars to add to reserves – the tiny little Current account deficit was easily financed, so the excess had to be mopped up by the RBI. (If it didn’t, the rupee would appreciate, we imagine. We don’t endorse it but this is how it happened) Key things we saw in the data:

Our view: This is, in a lot of ways, good news that the current account deficit is down. And this time, without the need of extreme restrictions on our second largest import, Gold.

The structure of this deficit is that it’s been helped by lower crude prices, and has been hurt by lower exports. Our software exports are only up 5% year on year, while remittances are flat. The rupee too, has not been very volatile, and remained within a 10% range through the year. This data should help the rupee, which is currently at around the 64 levels, but out there, a larger crisis is looming in terms of increasing bond prices in India and indeed, across the world.

Things have changed dramatically in the last two months. In May, FIIs took money out. We have seen a decline in bond prices, despite a drop in interest rates. The rupee has fallen from the 62.6 levels at end-March to around Rs. 64 today. We have seen further contraction in exports, while imports have increased. The next quarter will be quite different, in our opinion, though the crude price impact still remains strong.