There’s some serious damage in the bond market in the last few days. We posted (in Premium) that Banks are likely to lose 10,000 cr. on just the extra exposure they have to government bonds. And look at how much bond yields have risen: 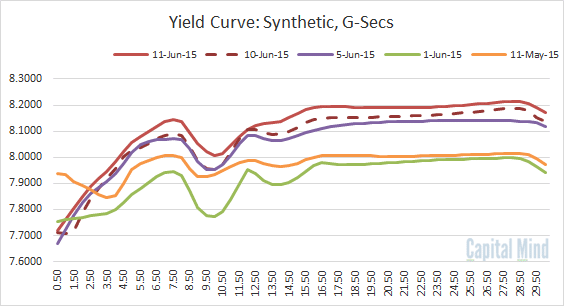 From the orange line (1 month back) you see how, after the Jun 02 rate cut, markets have taken longer term yield up significantly, while short term yields have fallen.

This Affects Mutual Funds, but only the Long Term Ones

Mutual Funds that hold long term bonds will be affected. Some bond funds like liquid and ultra short term funds will actually be giving awesome returns. See the short end of the yield curve – at this end there are gains, not losses, for bond holders. (But gains are muted because these are short term bonds).

Long duration mutual funds – typically the Gilt funds, most of the dynamic funds and so on – will have lost money. Many will have lost around 2% in the last month. You might make back some of that loss due to the interest component (a yield of 8% means 0.67% per month comes back as interest), but even counting that, there’s a loss in holding such funds.

Our view: While we won’t invest any more right now, considering this bond market move, it isn’t yet time to sell everything.

There’s Likely To Be A Bond Auction Failure Today

RBI will auction Rs. 15,000 cr. of bonds today. Last week we noted that underwriting auctions were very high (5bps, 6 to 11x normal) and guessed there would be an auction failure. And there was, the second auction failure in a month.

What are underwriting auctions? Here’s a gist from that post:

If the auction succeeds they will be paid the commission anyhow. If the auction is not fully subscribed, then whatever part is undersubscribed is “devolved” upon the underwriting primary dealers. Meaning, they have to buy the bonds if no one else does.

Typically this is easy money since everyone wants government bonds. So commissions are of the order of 0.005% or less. That is 500 rupees per crore, so even a 16,000 cr. auction will probably net the whole primary dealer system only about Rs. 50 lakh. This is not much by banking standards, but it’s there to keep incentives in place.

What happens when dealers think they can’t sell the underlying bonds in the auction? They will then fear that they have to buy the devolved bonds, which they have to then dump on to the marketplace. In that process they will lose money (anyone dumping anything desperately will get a lower price). To compensate, at such times, banks demand larger underwriting commissions.

Yesterday, the commissions demanded by banks went EVEN HIGHER: to as much as 8 bps. (link)

A typical auction is around 0.1 bps to 0.4 bps. We are now seeing 10x to 20x these numbers as commissions, meaning underwriters expect these auctions to fail and therefore they could lose money on having to buy and hold them.

The bond market issues will weigh on equities, specifically banks in trade in the next few days.