But guess what, a few investors had no clue. 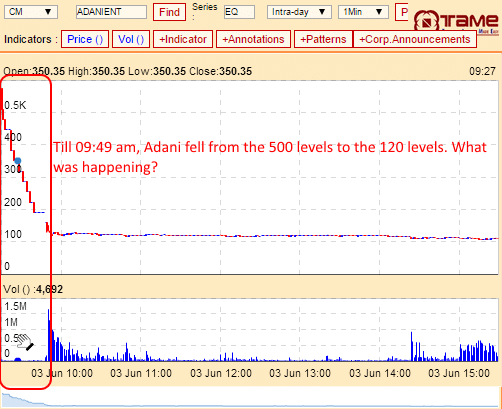 The markets opened at 9:15 am. For the first half hour, there was tiny volumes, but the price of the share kept dropping steadily, until it hit the 120 mark at which point it stabilized. People were apparently buying – in quantities like 5000 shares a minute or so, and the price went from Rs. 500 down, not instantly but gradually. The guy who bought at Rs. 500 would be super-unhappy.

This is very strange and obviously the first set of buyers had no idea this was happening. And it’s not really apparent why there wasn’t any heavy selling either. The first set definitely got gypped – but it really was their fault, since it was well known that the stock would say it. (In fact, I was in the ET Now studio, where the anchor actually mentioned that the price would fall substantially, before the market opened.)

But this raises a question: Shouldn’t there have been a price discovery session for Adani for this purpose? In general that was supposed to happen in the 9:00 AM to 9:15 AM session, but apparently did not.

Overally many investors who had no idea, got hurt bad. In fact, we’d say they got suckered, from the information asymmetry – a good word for saying how can one track all that data. This is one big reason why you should track corporate events on a daily basis. An interesting thought opens up for Capital Mind‘s future course too!