Adani Enterprises seems to have fallen big time. Looking at the stock price, you wonder if Modi’s magic has completely collapsed! 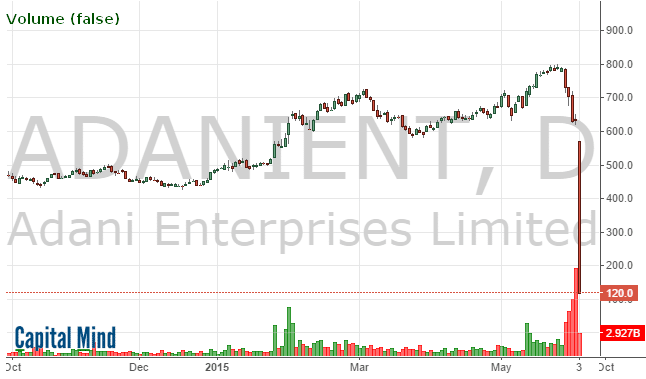 Adani Enterprises has been “demerged”, in a weird sort of way.

Adani Enterprises owned some stuff that were related to ports, power, and transmission. These, they decided, belong in specific companies. Adani ports and Adani Power are already listed entities, so the power plants and port operations move to those companies.

You need to stand on the bench and say sorry to Adani Uncle.

No, I’m kidding. But I hope you knew that. I’m supposed to be all formal and all and sometimes in the middle of complicated paragraphs it just gets to me.

Anyways, if you own less, don’t fret. If you own 10 shares of Adani Enteprises, you’ll get:

And the fractions will be sold and the money paid to you at a later date.

So why did Adani Enterprises Fall 80%?

The three listed firm ownership adds up to 59,70,303. If you assume Adani transmission lists at Rs. 40 or so, you will be “even” on the investment.

(Remember that stocks have fallen a lot today. If Adani were to have fallen 4%, then yesterday’s investment should have fallen to Rs. 61,20,000 or so anyhow – so the difference is even smaller).

The point here is: even if the share has fallen 80%, the amount of money you have lost will not be anywhere close – it will probably have dropped 3-4% along with the market today, that’s all.

Note: We will fix our charting software for Adani Enterprises, and the Modi Index for this soon.