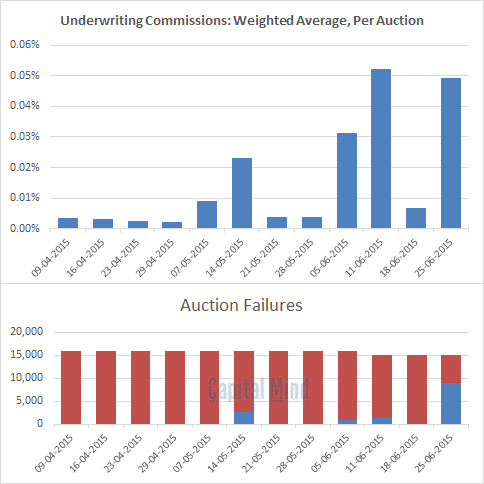 RBI has just cancelled 60% of the government bond auction today. With four bonds on sale, we had noted again on twitter that underwriting commissions has reached a scary point again and that there was likely to be an auction failure.

We have noted in Capital Mind Premium that banks stand to lose between 5,000 and 10,000 cr. this quarter as bond prices have fallen substantially (and yields have gone up).

The fall in bond prices means banks that hold bonds lose money which is “marked to market”. Only excess bond holdings are marked to market, but there are over 600,000 cr. of “excess” bonds held in the market.

Underwriting auctions had gone to a high yesterday (the cost banks want RBI to pay, as a percentage of the auction, to underwrite it):

Note: In earlier auctions, the auction failure resulted in the underwriters (banks) having to buy the bonds at the RBI cut off. This time, RBI refused to even do that. Why? Because if they did, the banks would take the bonds and dump them in the market, creating a price fall even further.

This is an interesting point. Let’s see how this pans out. Tuesday is the end of the quarter, and this may be a last ditch attempt by RBI to prop up yields otherwise banks are going to be in serious trouble. All you have to do is provide a relief pill by Tuesday, apparently.

But the stupidity is that banks aren’t lending to you and me. They’re parking their money in government bonds. They took that risk, knowingly, so they should take the losses. If they wanted to be risk averse they should have parked money with the RBI overnight window instead. This smells of a stupid bank rescue, and will come back to bite us very soon.