Okay, so hardly anyone notices this stuff.

The RBI keeps holding auctions of T-Bills – or Treasury Bills – every week. These are notes for government borrowing that mature within a year. They are traded on the wholesale markets, typically by banks, insurers and mutual funds.

Every week,the RBI auctions 14,000 cr. of T-Bills (in the first half of this financial year). There’s a 91 day T-Bill every week (matures 91 days after issue) for about 8,000 cr. That went through at 7.97%, higher than last week’s 7.85%. This auction got “oversubscribed” by about 7,500 cr. (see auction result). Excess bids of the “non competitive” variety are usually placed by states to park their excess cash. This is also not significantly different from what’s been happening recently. 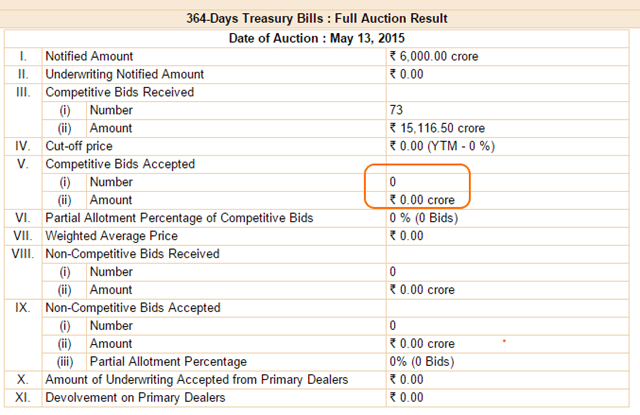 Now Bloomberg thinks that this is an auction failure. That the auction probably had yields too high, so it had to be rejected. This would make sense if yields crossed 8% – that would send a bad signal to markets. And given it has the “excess” cash in the 91 day T-Bill, the government doesn’t really need this money urgently , it can wait till the end of 91 days. And in that piece it sees a big fall for Indian bonds in the last few days.

India’s benchmark 10-year yields climbed 19 basis points in the last two weeks as a global rout wiped more than $400 billion off the value of fixed-income securities around the world in about a month. Twelve-month commercial paper rates in India have rallied to 9.03%t from this year’s low of 8.71% on 13 April, data compiled by Bloomberg show.

While stock markets are down today (Thursday), bond markets are doing okay, with the 10 year yield falling back to 7.94% (from nearly 7.99% yesterday). Even the US Dollar has retreated to Rs. 63.9, versus levels like 64.2 yesterday.

These are volatile times. Auction failures will invite reactions from the RBI, especially if yields are rising as interest rates are falling.