2014-15 was the biggest Year for RBI Dollar purchases, ever. With over $10 billion purchased in March ($7.6 billion in cash, $2.5 billion in forward contracts), the RBI has effectively purchased over $96 billion in the financial year. 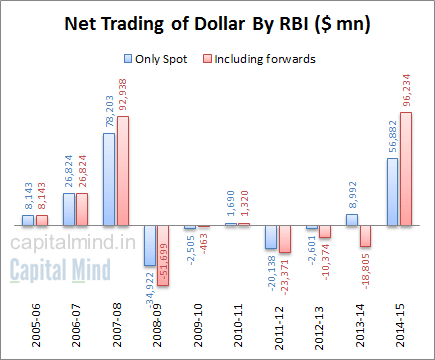 In the last two months of the financial year, RBI’s been buying dollars like crazy, even though the rupee has been depreciating! 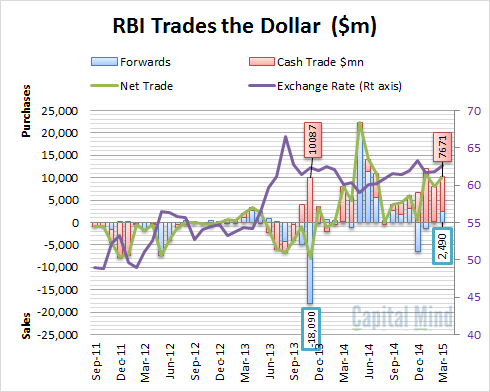 Most of the forwards are maturing in the 3 months to 1 year range, and there’s a big $25.6 billion payout (to repay FCNR depositors who pumped in that much in the 2013 November timeframe, for three years). 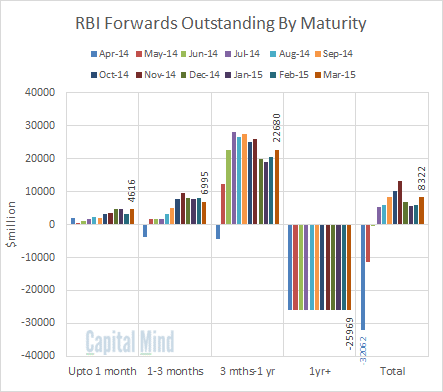 While RBI fills its coffers with dollars, remember that now, the rupee is at 64.2, and dollars should be flowing out of RBI, but remarkably, till last week, RBI seemed to be continuously adding dollars! We’ll know only two months later if RBI has been buying dollars now, or if this is just a “revaluation” (that is, if the dollar fell against the Euro and GBP, our Euro/GBP based reserves will fetch more dollars). 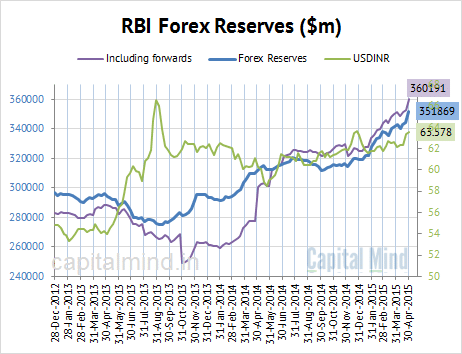 Our View: This is not a good sign. The RBI has been saying it’s buying to ensure low volatility but look, the dollar has been hugely volatile, moving easily above the 64 levels.

We also introduce inflation (since we print rupees to buy dollars). Our past is littered with instances where RBI created monetary inflation, and gave us the excuse it was to build forex coffers. We are there yet again. Earlier last year, it would sell rupee bonds to offset its purchases of dollars, but recently it stopped doing that – so essentially, it is now printing rupees at abandon. We’ll see terrible inflation within 18 months if this persists.