I was interviewed on ET Now Today, and here are the snippets. Plus, clarifications

I believe that splitting Airtel’s business into the Indian and African units is a good idea, but it’s unlikely to happen because of the debt overhang.

Therefore, it would be seen that will the lenders agree on creating a new entity and pass on most of the debt to it. That would be difficult to push. Even if the telecom operator engineers a split, it might have to end up taking a lot more debt on the Indian entity and reduce the debt on the African entity. That would not be good for Indian shareholders as the debt was essentially taken to buy the African business.

In that context, I do not see a possibility of this coming in soon. If such a scenario comes, it will have a one-time hit in terms of profit.

I do not know Persistent’s current strategy as yet. We do not track it. But we really like the management and we loved the momentum in the stock when it climbed above Rs 950. In that context, the CLSA target price of Rs 1,000 is a bit disappointing because it is just marginally above the recent highs.

You would expect them to say that stocks like Persistent to actually to see a doubling of their stock price in the longer term, rather than settling for something like Rs 1,000 apiece.

Note: The transcript is wrong. I had said I loved the past momentum when it climbed to 950, not what’s in that page.

I checked what Persistent was doing – and they have an SMAC strategy. Social Media, Analytics and the Cloud. Which involves things like building on top of Salesforce etc. I’m sure the others have an “A” and a “C” strategy, but the social media bit has been subdued in all IT players (with the possible exception of TCS). This might not be a long term differentiator for Persistent if they don’t get out of a pure service mode, and actually own infrastructure or products in the space.

BTW, I didn’t say the stock would double. We don’t track the stock. But I said what’s the point of a CLSA upgrade to just Rs. 1,000 when it was there just a few months back? 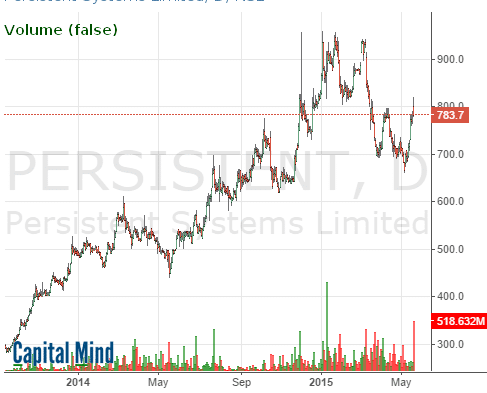 I spoke in the context that banking numbers were indeed excellent. The EPS growth on Yes Bank (28%), ICICI Bank (12%) and most other were way beyond any of the other stocks. However DCB’s numbers (which I was asked about) weren’t something we had a good handle on.

Hope you had fun watching, I was petrified today as I was totally unprepared without a deep analysis. But there’s always a better day tomorrow!