Foreign Investors have been selling, they tell us. In fact, they have sold for NINE consecutive trading sessions, for a total of Rs. 10,700 crores .  But what does that mean?

Indian markets require that every foreign investor’s trading is recorded and revealed. They bring in money into sequestered accounts, the money is paid to a custodian, and then used to buy shares. The investor can determine what to buy and how much and at what price, of course. The exchanges get this information on a per-trade basis, and they collect and collate this information. SEBI provides it to us on a daily basis.

This is only institutions since foreign individuals can’t buy Indian stocks directly (unless they are NRIs). Foreign institutional investors are called FIIs or FPIs (Foreign Portfolio Investors)

While data comes to SEBI, it is now revealed by the big depositories: CDSL and NSDL. They reveal data with a day’s lag, so today the number they release is actually for the previous trading day.

Cumulative Sales and Purchases by FIIs is an interesting way to look at market order flow. FIIs constitute a reasonable chunk of the market. Since we know their investment in debt and equity markets, we can check how much they “net” invest (that is, purchases minus sales) in the last 10 days: 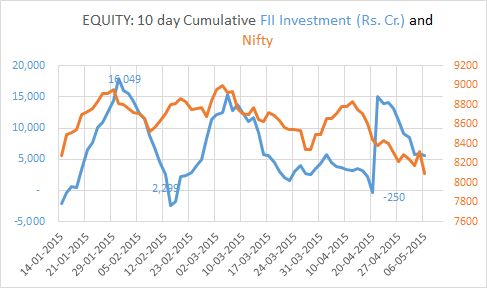 Equity investments went up sharply in January and then in February. The big number if April is due to the FII purchase of Sunpharma Shares that Daiichi sold recently. Net of that, we would have gone negative on FII flows.

The debt situation isn’t all that bad as they seem to have bought a bit. Note that today (6th May 2015), FII Flows have been negative. NSE and BSE release preliminary data before hitting SEBI and it shows -1700 cr. for FII transactions (net). Today’s data doesn’t reflect in the graphs above, as it is of a day earlier.

Have FIIs Really Been Selling?

Well, here’s the data, rolled up by month and year: 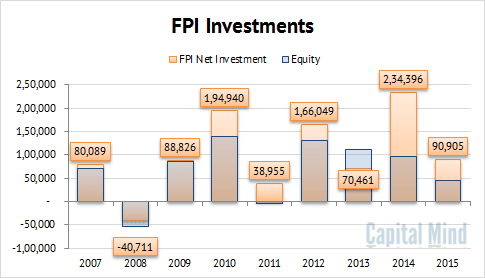 (Ignore May, it’s too early to call)

Why are they Selling?

Firstly, this isn’t only FIIs selling. The fall is also by retail participants exiting the market. The FII selling is just an excuse.

Secondly, the problem of why they are selling is not clear. Is it because Indian results are horrible? Possibly, and they are horrible indeed.

Is it because of the strong taxation India is trying to introduce? This was true of the first part of April but is not longer applicable. There is enough clarity now.

Is the macro? Bad production statistics, resurgence of inflation, inability to reduce the fiscal deficit and a bad monsoon might be triggers.

Is it because China is more attractive? This could be, since there is $376 billion of new IPOs in the next 10 days  in China.

The Shanghai Composite Index dropped 1.6 percent to 4,229.27 at the close, adding to a 4.1 percent loss on Tuesday. Twenty-five companies are scheduled to sell new shares from Tuesday through May 11, which may freeze 2.34 trillion yuan ($376 billion), according to data compiled by Bloomberg. IPO shares have jumped 44 percent on average on the first day of trading this year.

All FIIs have done in India is sell a piddly $1.8 billion in the last few days. If they want to, there’s a lot more to sell.

And why is a Chinese IPO important?

It seems every single one of the 29 IPOs in China is up the “circuit limit” of 10% every day since March. See one of them: Beijing Baofeng:

So Will FIIs Continue To Sell?

Only the FIIs knew. In other words, if I knew, I’d probably not tell you.

But we hope this primer helps understand what FII selling is, how it’s been looking and why, recently, they seem to be so negative.

When you hear "the index", most investors think of the NIFTY50 or the NIFTY500. As market-cap-weighted composites of the largest companies in India, they ...