What is Net Neutrality

Net neutrality means equal opportunity access to the Internet. To understand this, let’s first see what is NOT equal in terms of net acess.

You see those ads that say, “Airtel offers free access to Youtube on it’s data plan“. That is not Network Neutral.

Why? Because it offers free access to Youtube, but not to Vimeo, or CNBC or if we ever get to doing it, Capital Mind TV. You will not use these other services that compete with Youtube simply because you have to pay Airtel to access them, whereas Airtel does not charge you for Youtube. This drives traffic to a Youtube who is happy to pay an Airtel so that people will come to it and not to their competitors. This is harmful because tomorrow you may get a faster, better and more useful video service – like say Meerkat – which allows you to directly stream content from your video phones to online video. But it gets a massive disadvantage as Youtube is given cheaper access by your telco.

You might say, so what, let Meerkat pay Airtel? But that’s the point: if everyone on the service end paid Airtel, they will protect their turf and disallow other players to come in, even if they wanted to pay. You’d have to have rules that say anyone can pay and make their offerings free, which is a regulation that is as good as saying no one is allowed to pay to make their traffic cheaper or free. That way, a totally free service like perhaps a Salman Khan academy, which is purely educational can be accessed by anyone for no extra charge. Net neutrality means equality of access.

This is a little like saying “If you drive a Mercedes, no toll on this highway for you, because Mercedes has paid the toll operator already”. It will be unacceptable, specifically as a toll operator on public infrastructure to do this.

And then you could say “Youtube is faster on Airtel than other web sites“. This again, is a hidden advantage to a Youtube. What Airtel is really telling you is: Access the guys who paid us, otherwise we will slow down the internet for you.

This is also harmful to the neutrality of the network. In the road example, assume there was one special lane only for Mercedes vehicles that was much smoother than the rest. Would you be fine with that? You’d want to use the same lane – after all, you paid to enter the tolled highway – but you can’t if you don’t own a Merc. Unacceptably divisive, and therefore, not Neutral.

Finally, you could say “Here’s a data pack, but we won’t let you use Skype on it“. Not Good. This is equivalent to saying, “on this toll road, we will not allow you to use Mahindra Reva Electric cars, because we have a deal with oil companies”.  As you can see, this is unacceptable. In what is public infrastructure, what you drive cannot be a differentiator. You can charge tuition fees in a school, but can you deny access to Assamese students? That would be blatant discrimination. In that sense, if all traffic is equal then no traffic can be banned (with the exception of “banned” illegal websites, but that is equivalent to saying you can’t drive into this road because this car is marked stolen, which is a fair restriction).

What The Telcos Say

The number one argument by Telcos is that Over the Top (OTT) Services like Whatsapp cause them to lose revenue (on SMS, and even on voice). Which means they should be compensated.

This is bunkum. The Airtels of the world don’t give you data for free; they charge you for it. These charges may be low or high in comparison with their costs, but no one asked them to price things too low. And in any case, it looks like data revenue is far better than voice, because you seem to be able to get more revenue through the same fixed cost (of spectrum and all that) than you can with voice. Basically, you as an end user are charged for data when they use Skype or Whatsapp – their argument about losing revenue is completely null and void.

The second argument is that the telcos spend money on security and on tracing calls and on KYC, whereas there is no such cost for the OTT players. The KYC bit is illogical – if they access the OTT service through a telecom provider, and they pay the telecom provider data charges, then the KYC is the responsibility of the Telco, not of the OTT provider. I can’t be expected to have a KYC for every person reading Capitalmind.in.

But there is something to be said about tracing calls and security. India already has a framework where it can demand contents of emails or text from internet providers in case of security. Tapping Skype calls – we believe the infrastructure already exists with the Indian authorities, and with foreign players too. In general, you will need to trap all data to actually see what’s happening internally, and if that is actually required, the only place to do it is at the telco end. If this costs more, they will need to increase their data charges, rather than try to foist it upon a Skype.

The third argument is that Telcos do not want to be a “dumb pipe” and want to make money off the fact that they bring the customer online. In a very Apple-ish kind of way, where any revenue generated through an App used in an iOS Product needs to pay Apple a share, the telcos believe they have a right – even a divine right – to such revenue generated effectively through their network.

This is illogical. If you have built a tolled road, which is effectively public infrastructure, you do not have the right to all the commerce generated on that road. You can’t say that if a farmer takes his produce to sell somewhere, that you must get a part of it because you enabled access.

Another argument is that OTT Services don’t pay the government. No entry fee, no revenue share and no spectrum charges.

The answer: Because they shouldn’t. A website or service should not be licensed (we go back to license raj?) but the provisioning of a public resource – like spectrum – should and will be auctioned or provided to telcos for a fee. If Google were to own fiber and become a telco, it would also be charged similar license fees and spectrum charges (and Google does own a lot of dark fiber which it will undoubtedly use some of these days to provision services for end users).

What The TRAI Says

The industry regulator, TRAI, wants to say something, but wants you to tell them what you think, first.

They’ve put a very complex paper out there asking for questions. (Click here)

There is a more understandable abridged version. (Click here)

The basic questions are:

All of these questions have simple answers – it’s not right to regulate internet services as TRAI (there is police and fraud and consumer regulation anyhow). Revenue impact is there, but so what; is a regulator present to only protect the profits of the ones they regulate? That is an asinine argument – if that was the case, the airline regulator should have drowned in a small cup of water by now.

If the response by telcos is to raise tariffs then pray tell us what is stopping them? We’ll just choose the cheapest among the reliable, thank you, because they all just deserve to be dumb pipes. (These are my views on banking as well)

Net neutrality is not negotiable. We cannot be okay even with free access to Wikipedia. That everyone is the same means everyone should be the same. Discrimination is not okay in any circumstance.  If two players decide they want ultra-secure, ultra-fast access, in which case they draw a leased line between each other (brokers on the NSE/BSE have to do this), but on the generic internet, the quality remains what it is for everyone, at least at the telco end.

Should the TRAI Have Such Powers?

In the very essence of this topic, the concept of Net Neutrality is also about the very existence of a TRAI as a heavy handed regulatory body. At some level, they are unnecessary; for instance mandating extremely heavy KYC requirements without a common framework is extremely stupid. A common KYC for all telco services – from DTH to fixed line broadband to mobile services – would have been easy to establish for the TRAI.

But no, they didn’t do it and now to even get a prepaid SIM card, one has to submit all sorts of documentation, with a signature on each copy, a photo and address/id proofs. This is TRAI being an extremely pompous regulator – the very industry you regulate had the ability to consolidate KYC details and house them securely with perhaps SMS or email based verifications, but no, you wouldn’t even think of it. Instead, you fine the CEOs when you find minor errors on KYC. It’s so bad that if your photo isn’t crystal clear on a photocopy of your ID card, your application gets rejected.

And yet, they did a reasonable job curtailing SMS spam, though that stuff took years to finalize and implement. Ironically, that one regulation resulted in the death of more VAS services than any of these OTT services.

Do you want your data fees looking like this? 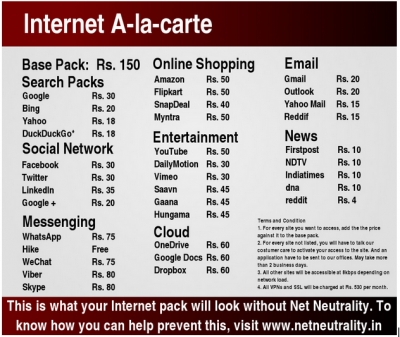 The important thing to note here is: the new wave of internet services are actually going to be better than the local ones. With 4G and perhaps 5G in the future, we will pay more for data anyhow, but that payment will be small in comparison with the fact that we can have a lot more done on the network. Productivity is key, and we will NEVER go back to paying Rs. 16 per minute for a phone call, and that is a good thing.

In this new era, TRAI will have to reinvent itself and become a regulator that provides neutral and equal access to the internet. It will need to be told that Net Neutrality is not just good for us, it is a stated goal.

We must ask our parliamentary lawmakers to ensure this happens. With Net Neutrality in all its forms as a pure and stated goal, TRAI will be required primarily to ensure that no Telecom operator can discriminate based on type of application on what it will charge the end user or the speed the user sees. This will benefit our country tremendously, even if data charges were to increase initially.