India’s Trade Deficit widened to $11.8 billion, which is the highest of the last four months (since November). Total imports fell 13% but exports fell over 20% in USD terms. 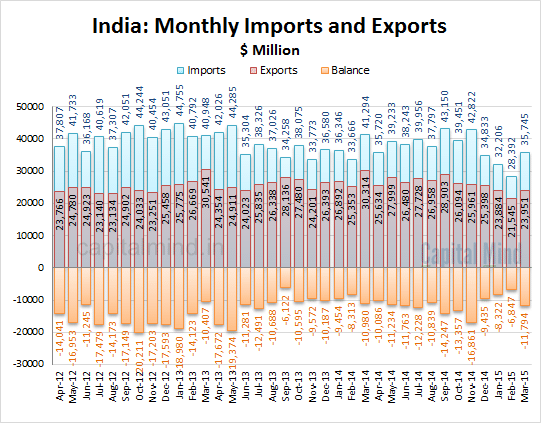 And the big help was oil imports which have fallen over 50% as a result of the price drop in crude oil, our largest  import. However, non oil imports seem to have gone up by about 11%. This is not a bad thing, as India’s economy relies largely on imports, and an increase in import growth indicates that there is consumption demand within India.

However, most of that demand could just be Gold. Apparently, the change in regulation has made Indian gold imports double to 125 tonnes. 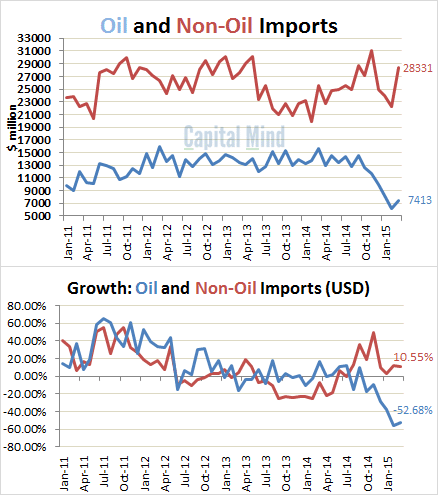 Adding up Imports + Exports, our total trade too has fallen tremendously. Trade growth, year on year, is at the lowest in over five years at -16%. 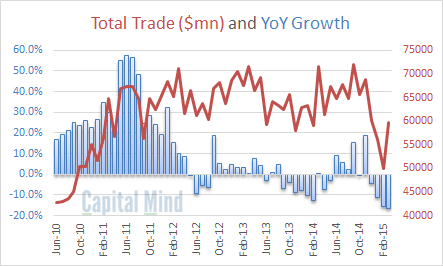 Total trade has fallen from $71.6 billion to $59.6 billion, year on year. Out of the drop of $12 billion, about $8 billion comes from reduced oil imports, while non-oil imports are up by $2.7 billion. The big problem is that exports fell by over $6.7 billion.

Export drops are also because of crude oil price drops. We export a lot of refined products (petrol etc.) whose worldwide prices have fallen because crude prices have, and so while a refiner gets a lower input price, he gets a lower output price from his customers as well.

The situation is strange when looking at India, but the rest of the world isn’t in great shape, so obviously trade will suffer. Gold import rises, falling exports and a rising trade deficit aren’t good news for merchandise trade; results are now showing that IT services, our biggest export component of non-merchandise trade, is also slowing considerably.