The arguments by Telecom Operators against “Net Neutrality” – or their desire to not just charge users but also website and application owners for allowing users to access that content – is also financial. They say a lot of things about their revenue being cannibalized, that they have to make spectrum investments and so on. Let’s meet their financial fears head on.

The basis of this article is to state that:

Firstly, we have to understand that by nature, revenue mixes will change. Telecom operators all over the world are seeing a substantial increase in data revenue versus voice and SMS. All technology will make one thing obsolete while other things take their place.

Secondly data revenue is also growing exponentially. As you can see below data connections and usage per customer is going up dramatically, as is average revenue per customer. (Note: Airtel’s number of connections went down in Q4-FY14, or March 2014, as they culled incidental users from the count. )

These charts are from Medianama’s excellent report. (Click to enlarge)

From Airtel’s own presentation (Nov 2014) we have them saying that data revenues will drive their future: 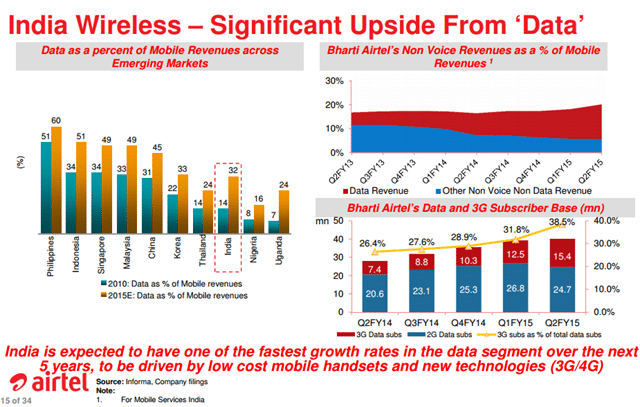 This means Bharti Airtel EXPECTS data to cannibalize voice and SMS revenue, regardless of charging websites for their business. Since no other country mentioned has anti-Net-Neutrality, meaning they don’t charge Skype, or Whatsapp, or any other provider for their users coming through, it is obvious that data can be a significant revenue source EVEN if we are Net Neutral.

Financials: There is NO Loss to Telcos Because of Increased Use of Data, Data Charges Make Up For It

Indeed, people are using more data than voice, or SMS. But the increased use of data means that by and large, people are paying for that data. Let’s not get caught in per message or per call metrics, and look at the overall wallet-share of all users on average. We collated data from TRAI for India as a whole, and we separately got data for SMS revenue per user per month, and similar metrics for data and voice calls. Here’s the evidence: You see the picture?

And then will you believe that telcos think they actually LOSE revenue to data? They make revenue on data, and a heck of a lot of it.

Financials: Are Telcos like Airtel and Idea making losses?

Sure, this is revenue. But the top operators in the country: Airtel, Vodafone and Idea – are they losing money? Answer: not by a long shot! We have figures of Idea and Airtel, who are public. (Airtel loses money in Africa, but let’s ignore that) 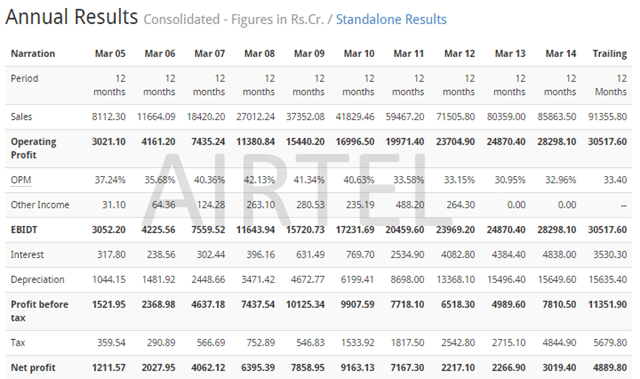 (From the awesome screener.in)

The financials in terms of profits were ridiculously high earlier for Airtel, but the fact is that they fell and are recovering smartly.

Some people say that this is bad because of their low “Return on Capital Employed”. ROCE for Idea and Airtel are around 13% and 16% respectively (Earnings before interest and taxes, divided by Equity+Debt).

But if you use a better term for utilities, which is what telcos are (like power providers or highway toll companies) they are measured on RoE, or Return on Equity. If you take debt, and then you pay back the interest on the debt, how much return are you left with, on your total equity?

For Airtel the RoE is 20% (for India standalone) and for Idea, around 20% too. This is higher than bank FDs by a considerable margin, and utilities are expected to have RoEs of 15% or whereabouts. Plus their debt costs are coming down, as interest rates fall. (Vodafone’s traded short term debt went below 9% a year, lesser than the base rate of most banks!)

If you look worldwide, this is exactly how it works. Verizon has a 10% ROCE, but a 70% ROE, as they have a lot of debt. AT&T too, has only 5% ROCE but 10% ROE. This is how the industry works everywhere else; high debt, and juiced up ROEs.

SMS and Call Revenue : Anti Spam Regulations Would Have Already Cut Them

SMS revenue will have dropped anyway because of TRAI’s anti-spam rules. (They created the Telecom Commercial Communications Customer Preference Regulations in 2010)  Before that, Bulk SMS providers were offering rates as low as 1 paise per SMS, because they were getting these deals from telecom operators. Today, because of TRAI’s timely action, SMS packs cannot be sold in an unlimited fashion and costs of non-compliance of anti-SPAM rules are very big. Therefore, revenue from spammers, which was not earlier bifurcated but would have formed a significant chunk of the SMS revenue earned by telcos, has fallen.

This timing has also impacted call minutes as the anti-spam regulation also applied to unsolicited voice calls. With the India-wide Do-Not-Call registry, telecallers who would earlier call at odd hours for advertising or marketing were no longer allowed to, and that would crimp telco revenues anyhow.

These points mean only one thing: Telco revenue from SMS and Voice would have anyway come down even without “data” coming in.

This will obviously make traffic gravitate towards data based messaging.

While this imposes a lower cost per message on the user, the increase in messaging frequency will result in larger data revenues in comparison. Which means revenues in total have to be seen, not just as a function of “per-message” revenue, which is a false metric.

Data is charged to the user on a per-kB basis, or as packs with a limited cap (effectively a per kB cost). This ensures that the larger the usage of data, the operator is paid more. If the user would send 10 SMS messages a week, he may send and receive 1000 Whatsapp messages in the same week. Even if the cost of data is Rs. 0.01 per kB, and each message is 5 kB, then the user spends Rs. 50 per week, versus his SMS usage at Rs. 0.5 per SMS would give the telco only Rs. 5 per week. Effectively, increased usage increases his messaging bill by 10X!

You can see this by the rapid increase in revenue, as shown above.

Idea’s debt currently is about 18,000 cr. so it will increase it’s debt by about 45% for the next three years. Or, put another way, 15% a year, which is how much its interest costs will increase. Idea’s data usage is up by 100% in the last year, and number of users too, by over 33%. With more spectrum, they can attract far more users, and that will make their revenues jump way above any impact of increased debt!

What we mean is: Their increase is debt is not as substantial as their increase in data revenues from consumers, which will more than make up for it. Even if you considered investments in infrastructure and reach, the increased revenue potential is massive in comparison.

Capital Mind is biased towards Net Neutrality, not against it. So our opinion comes from that angle. But it is time to debunk the defence of the Telecom Operators who say it is time to now charge internet companies for using their infrastructure.

It is the telecom operators who are making awesome revenue by users increasingly paying for data to access internet applications like Whatsapp, Skype and Flipkart.

It is the telecom operators who stand to make the maximum profit from people using videos and large data applications.

It is financially better for them to be great pipes to the content we want to use. If that today is Facebook, Skype and Twitter, so be it. If tomorrow it is Meerkat, Vimeo and IndiaTV, so be it. The end-website or application doesn’t have to pay the telco – the telco is effectively piggybacking the Internet Applications’ popularity by making money off the data it charges its customers for.

It’s time to make the Net Neutral. It’s time to debunk the propaganda that ooh, our Telecom Operators are losing money. They’re not, and in fact, they’re raking it in. They say one thing to investors: Data is the future. It is, and it is so because of the great apps out there, on which the telcos have made so much money charging for data already; attempt to charge those apps, and like VAS, the telcos will destroy it for us.

Charge us for data, but you can’t tell us how we can use the internet. You are making a lot of money that way, telcos.

This is a free post under the CC-BY licence. You can copy, modify, change or redistribute it, as long as you reference this post. Please also look at Save The Internet .