The HSBC Markit Purchasing Managers’ Index (PMI) shows a marginal expansion in Manufacturing for March 2015. This is at 52.1, up from 51.2 in February. 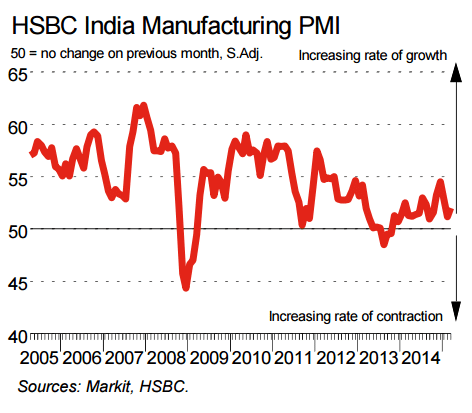 Anything above 50 is expansion – that is, growth from earlier months – and below 50 is contraction.

The data of 52.1 is good, and last month we saw that the combined number (services+manufacturing) for Feb 2015 was at 53+. However this time one note is worrying:

March saw a return of inflationary pressures across India’s manufacturing economy. After falling in the prior month, purchase costs rose at a marked rate that was the most pronounced since August 2014. According to panellists, chemicals, metals, plastics, energy and paper had all risen in price. Output charge inflation quickened to the strongest in four months, as firms attempted to sustain profit margins by raising their tariffs.

(Emphasis mine) This can be dangerous, especially considering that in April the impact of increased Service Tax will hurt the service businesses.