After three months of rising headline inflation, we seem to have substantially moderated to a low 5.17% in March, on the consumer inflation front: 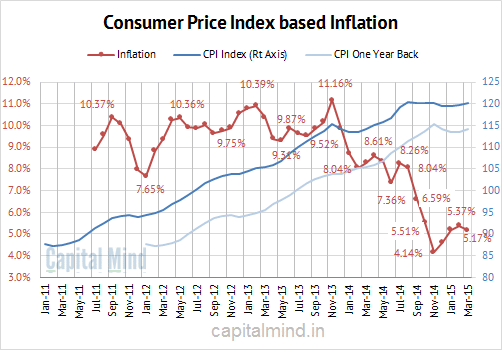 Some of this as you can see, is the base effect, where the inflation index last year started rising again in March and went up to the 120 levels in September after which it has flattened completely. In fact, the March number at 120.1 is flat since September 2014 (when it was 120.1 as well). While much of the drop has been due to the fall in oil prices, it’s also relevant that food prices have been very stable since then.

In terms of inflation, food has the biggest weight, and saw about 6.2% inflation over the year. Costs on Housing and Transport have fallen substantially since last September, and some of it is the way data is collected (April is when some of the housing data will change, for government housing rentals). but costs of Household Items has gone up. 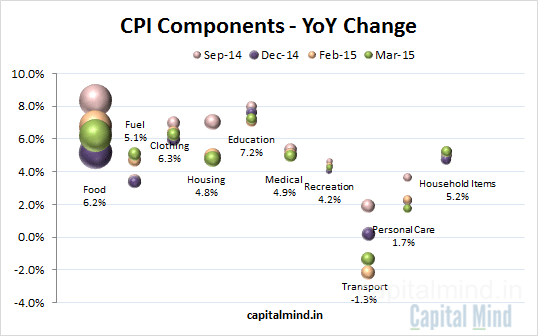 The drop has been seen in both Urban and Rural segments: Our View: Great News! Watch out for some sudden RBI announcements in the next few days. With 5.17% and a rising ‘past year’ data, it would not be surprising to see inflation fall again, below 5%.

This gives RBI room to cut rates some more. We see another 0.25% cut, very easily, and it could happen just about now. Many banks have started to seize the opportunity to cut base rates, after Rajan’s warnings earlier this month. Either ways, it would be senseless to keep rates high when inflation is demonstrably lower, regardless of whatever other impacts seem possible (like bad weather, or increasing prices or such).

Market reactions: nowadays, all good news is being treated by the market as bad. So let’s not extrapolate and say the market will go up; in fact, the last time Rajan cut rates (in March), the market actually fell by the end of the day.