This is a very interesting story on J&K Bank. The bank’s been in the news for the wrong reasons recently: for one, it saw a big fraud that hurt its Dec quarter results. Now it’s been hurt because of the floods in J&K, which will definitely hurt its NPA situation after the major floods last year too.

Much of these NPAs are as a result of floods, the situation in REI Agro and earlier, in HDIL (both of which turned NPA through HDIL has turned back into a standard account), and added to the NPAs were the losses due to the fraud.

This time we have fresh floods in Kashmir, which hopefully will not get serious. The J&K Bank situation gets hit by a combination of bad luck, aggression and fraud.

Today it continues to own about 10 cr. shares and it would like to get Rs. 70 per share for the stakes, says the CEO in an interview.

This interview is very strange as is the entire situation. The bank has been saying since 2013 that it wants to get rid of the remaining 5% stake. The latest kicker is that the government has allowed 49% foreign investment in the insurance industry, which means a MetLife can buy more if it so chooses. The obvious assumption is that it will buy stake from J&K bank.

But then why is J&K bank tomtomming this to the media? When you want to sell, you sell. You don’t go around saying we are close to the end of discussions, and we want Rs. 70 per share, and stuff like that – not to the media. You should be negotiating with the other side – MetLife. This concept of saying that this will happen is very scary to me – I personally think that if you want to do, you should do, not say things.

If there’s any reason to be concerned that a stake sale isn’t happening – or that the company won’t actually be able to get as much as it wants for the Metlife Stake, this is it – that it’s talking, and not selling. 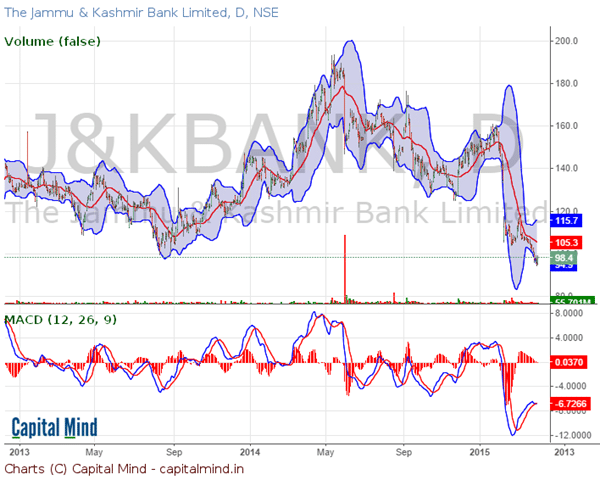 RBI has stopped special dispensation for restructured loans which allowed them to treat them as non-NPAs, as of April 1. This will result in an increase in NPAs of J&K Bank unless all their NPAs have become standard assets completely – which is unlikely. They had around 1800 cr. of restructured assets  – and it’s your guess as good as mine about how much this will add to NPAs.

We don’t know about Bhushan Steel yet but the bank has an exposure of around Rs. 500 cr. to the company. The Bhushan Steel account has many lenders – as much as Rs. 37000 cr. – so it’s going to be a big fight declaring it as an NPA.

The floods and the post-mortem on the fraud could result in further losses.

Is the Stock Worth Buying?

A number of value investors have been heavily long on the stock. Mohnish Pabrai of Pabrai funds is hugely long on the stock, owning 2.5% in two funds. There’s Fidelity, Acacia Partners, Route One, Aberdeen and even LIC in that stock.

The P/E is low: the stock is valued at about 4800 cr. market cap, while they have earnings of around 700 cr. in the last 12 months. (Some of that might erode in the coming months though) The Price to Book is even lower, as the company’s retained earnings and book is around 6,000 cr. (as is Tier 1 capital) – making the price to book a ratio of 0.8.

While they have 1500 cr. Net NPAs, and possible more coming along due to RBI’s rules and the floods and such, they also have some money coming from the MetLife sale. If you took out all of that, the book only falls to Rs. 4500 cr. and even then, that makes their Tier 1 Capital Ratio fall to just below 9%. SBI is way below that and so are many public sector banks, so relatively speaking this is a better bet.

The bank is backed by the state government of J&K who won’t let it die, and will infuse capital if need be. If they infuse Rs. 1,000 cr. of capital further, there is potentially a dilution of 20% but it will bring the capital ratios back to about the 12% level, should the NPA issues get worse.

In either case, my view is that the bank will see more bad news (NPAs, fraud, floods, RBI rule changes) than positive news, so while it’s priced low today it could go much lower, to levels that other public sector banks are priced at (Bank of India, for instance, is at 0.5 price to book). It is in a sense a public sector bank, and was benefiting from what was being seen as higher efficiency and tight control on NPAs. Both these may no longer be true, and therefore, the bank goes back to the valuations of everything else.

Watch out though, for the MetLife deal – especially if it drags on for longer.

Disclosure: No ownership, no family ownership, and no trades in the stock in the last 30 days.