We first thought the TCS results were okay. They made a profit of 5773 cr., they said, which looked okay over the previous year’s number of 5358 cr. (same quarter last year). But here’s the detail: The little * there is: * Figures are excluding One-time Special Employee Reward of Rs. 2,628 crore in Q4.

TCS has paid out Rs. 2628 cr. as a special bonus for the 10th anniversary of its listing. This means a week’s salary for each year served. Which will obviously help the longer term employees (and senior folks) a lot more than others.

Why should a company pay employees a bonus for the 10th anniversary of a listing? If it was symbolic, they should have declared a special dividend, one thinks. And ooh, there is no “special” dividend to shareholders !

a) this was a measure to keep employees with them, which is therefore not really “extraordinary” – it’s quite likely they will have to do such a bonus every few years anyhow,

b) or, this was what they might have had to pay as severance to exiting employees. (Remember, TCS was in the news recently for having fired people with about three months severance pay) Add to that a bonus for the rest of the staff, and boom, you can show something slightly better in the numbers, calling it “one time”.

The bonus is not a big deal – it cuts their cash reserves down by only 15%. But I doubt it is really something that is so big that they should announce results without this factor. Sadly, they have to please analysts, so instead of just hunkering down and taking that one time hit, they choose to release their numbers with a “excluding one time reward” which is just bogus – if you’ve spent it, you’ve spent it and it will have been spent anyhow.

But even if you take their own analysis (fact sheet) , here’s how the numbers look: 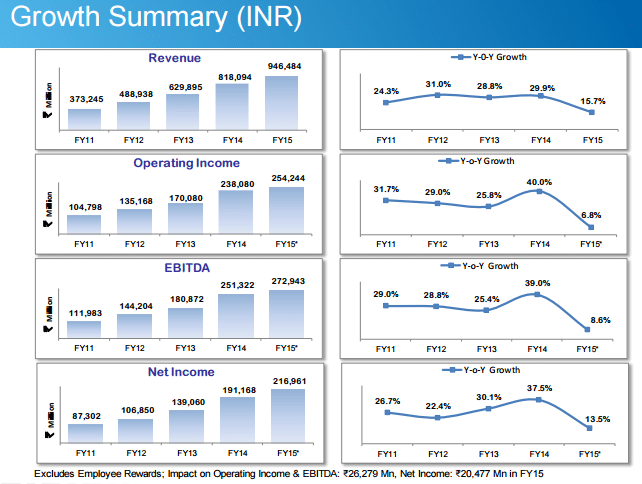 This does not include that “one time hit”. The growth numbers are still sloping downwards, with the Income growth even after being “propped up” by excluding the bonuses paid.

We had written earlier that this is an inflexion point for the IT Services industry. And it is, it seems, with growth slowing considerably. In rupee terms, at least. (And since the dollar has been fairly stable with the rupee in this FY, similar growth numbers on the USD data as well)

TCS seems to have slowed down on the hiring, while losing a lot of people this quarter: 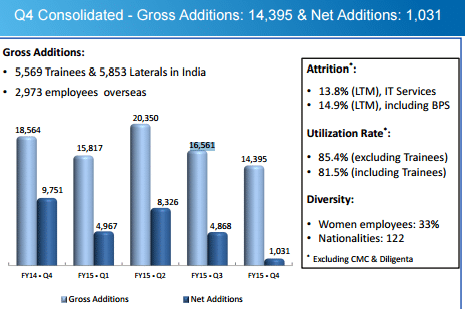 This is good, if the deal is to get rid of excess staff. It makes sense too, if the “bonus” is actually severance pay – reducing the headcount in that manner will help the company increase productivity.

Change is always tough, and firing people even tougher. But it has to be done for the sake of growth, and as a shareholder, it is only good to see a company attempt to become more efficient. 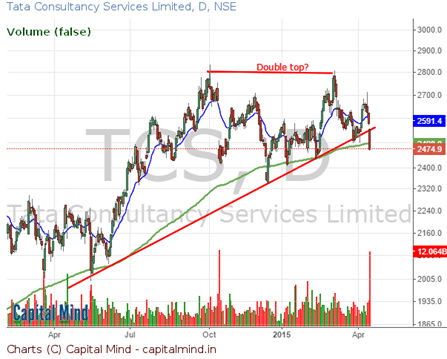 At the price of Rs. 2475, the P/E is 24, which is good for a bull market but not for a stock that shows signs of slowing down. TCS, like other IT companies, will have to hunker down and find greater productivity, or attack more markets. While getting rid of flab is a good step, it doesn’t solve the issue of slowing revenue growth. As inflexion points go, this quarter for TCS is just spot on.