The Index of Industrial Production (IIP) for Feb 2015 came in at 5%, which was a biggest we’ve seen in years. However, note that much of this is due to the base effect as IIP growth has been horrendous, and was actually at -2% in Feb last year: 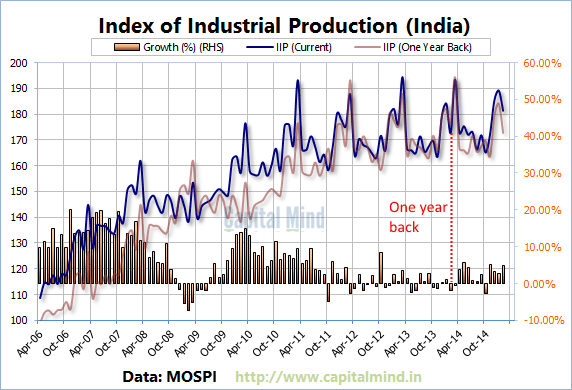 (Note: Growth for November has also been revised up to 5%, but let’s ignore that for now, as there was this massive Diwali effect. Diwali in 2014 was in October, and in 2013 was in November, and Diwali is when workers take time off, so production is low. )

To give you an reasoning of why this is only a base effect based gain: the IIP gain from Two years ago (2013) was just 2.9%. (Not annualized, so it’s worse)

The sector wise report has a good show for manufacturing, but not quite enough for electricity and Mining. However, Manufacturing is like 75% of the IIP. 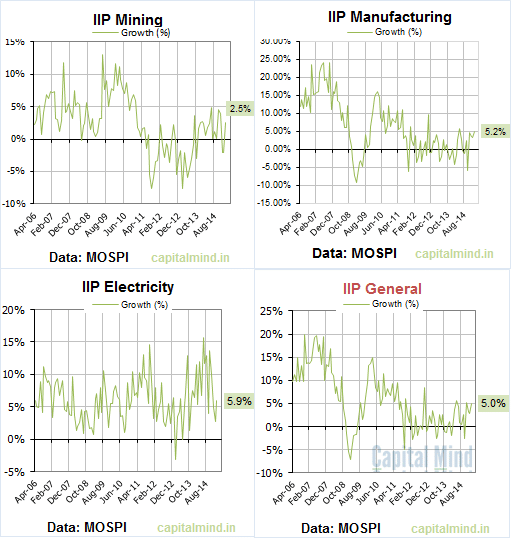 And the Use Based Indices: Better than earlier, but largely due to the base effect. The IIP is a lousy indicator in general. The use based indices show a big increase in non-durables, and durable de-growth has reduced (largely due to base effect).

In the numbers, we hear of textiles gaining a lot (60%+), which means the results of textile stocks – most of whom seem to have low or single digit P/Es – are going to do well, if the trend continues. That might be the only usable piece on the entire IIP.

There’s nothing much more in there – let’s see how March comes up.