There were three new “social” schemes in the budget. These sounded like big government expenditure and the devil is obviously in the details. We have some details from the FinMin.

Accidental Death Insurance for Everyone at Rs. 12 per year

How does this work?

People between 18 and 70 years old, who have a bank account linked to their Aadhaar, give a form to their bank to auto-debit their accounts each year. The insurance will be offered by public insurers and optionally by private insurers too.

Cost: At Rs. 12 a year, a premium is hugely subsidized by the government. But how much? I did a quick calculation for a similar policy with Oriental Insurance (a public sector insurer), and the premium came to Rs. 90 per year. The subsidy then comes to Rs. 78 per year. Who pays this? Apparently ministries have to find it in their unused funds, or something like that – there’s no clarity yet. Another source is the “public welfare fund” created out of unclaimed provident fund money, created in this budget.

The subsidy can be quite a bit lower since this is effectively a big group policy. The underwriting is by the insurance companies. And at Rs. 90 a year it effectively means that there will be one accidental death for every 2,200 people and the insurer takes the risk.

Note: The good folks on twitter write in that Rs. 90 is too much. If you have volumes or if you take a group policy the premium can be much lower. I agree. I will demonstrate that even with Rs. 90 it’s not a big deal.

Impact: This policy is very cheap. Everyone should get it, but if everyone does, will the costs go through the roof? Even if 10 crore people buy the product, that would be a subsidy of Rs. 780 cr. per year, which in the overall scale of things is miniscule. (Remember, total subsidy costs for the government are over 240,000 cr. per year). With volumes, the subsidy will be even lower.

Cost: Costs vary by age, and Rs. 160 per year per lakh for someone less than 30 years old is easily available with most insurers. (Translates to Rs. 16,000 per crore of term insurance).

Impact: We don’t foresee a big impact to the government budget. But if you’re 35 or above, it makes complete sense to buy this policy as a backup term policy. It is also useful for people who can’t get cheap term policies from any insurer. What you should do is if you have full time household help or drivers, get them this policy.

If you don’t pay tax, and don’t have a PPF, PF, or other pension account, and you are between 18 and 40 years old: you can pay a monthly amount to get a pension after the age of 60, of Rs. 1000 to Rs. 5000 per month. The government pays into your account 50% of what you pay, limited to Rs. 1000 per year. The government guarantees the pension, though the administration would be through the New Pension Scheme. 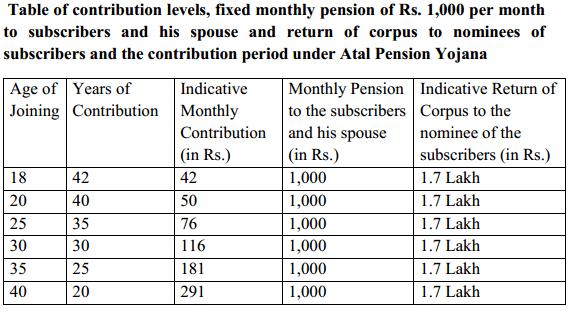 The breakeven rate for the government, if it pays 50% into each account for five years, is Rs. 7.1%. That means if the NPS is able to give returns of 7.1%, the government has no pension liability. Till recently, the average return has been over 10%, though we can’t expect that to last forever.

Impact: Since this is for non taxpayers who have no other form of security, the scheme is for the unorganized sector. A similar scheme – Swavalamban of the NPS – where the earlier government also decided to pay Rs. 1000 per year into each account, saw little or no interest. That scheme, even till now, has only 35 lakh subscribers!

Assuming they can take that to 1 crore subscribers and pay the full Rs. 1000 per year for every one (which is nearly impossible, many will pay less) the bill would be Rs. 1000 cr. per year. That is peanuts for the kind of pension income and security that can be generated. (Remember, these people would need the support, with low income levels)

If interest rates in India fall to zero like they have in the US, the debt on the government can be huge. But even then, I would rather that the government by paying out small pensions to more underprivileged people, than to fatten rich farmers and fertilizer companies.

While it sounded scary in the budget, the details tells us:

Edited: The Pension program is only paid for five years, so the break even rate changed to 7.1%. We also had a typo (90 yrs instead of the correct 70 for the first program). The error is regretted. Thanks to Manoj Nagpal and Debashis Basu for edits.