NTPC has decided to graciously give “Bonus Debentures” to all its shareholders. If you own a share, you get a debenture free. (It’s not “free” really, because nothing ever is, but we’ll get to that).

The concept is that you get a debenture for no further payment. Why? Because you see, the government has a bloody deficit.

What? What’s the connection between the government’s deficit and NTPC’s bonus debentures? Deepak, are you getting senile, old man?

I object to being called senile in my old age. I was senile when I was much younger. But we digress.

From the press release,

It then takes back that dividend, and issues debentures against that cash. That’s how it does this drama, through an escrow account in the middle.

Some of you would have guessed this: Dividend distribution tax will be paid, by NTPC.

Since the record date is March 23 (whoever’s a shareholder on that date will get the debentures) the price will fall after that. By the amount the debenture will be worth. How do we know?

Well, we assume the market knows – and the market is pricing the March future of NTPC about Rs. 10 lesser. (The future expires on March 26, which is after the record date). 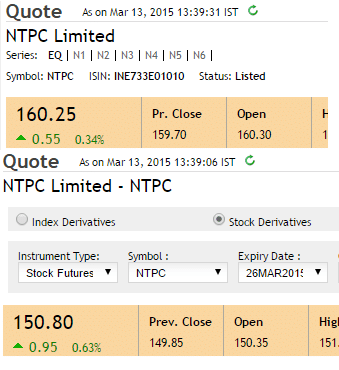 In fact, since it’s effectively a dividend of Rs. 12.5 per share, we think the price should fall by Rs. 12.5 instead.

The Impact: A Lower Government Deficit

The government owns 75% of NTPC. It could have sold NTPC shares, but it probably doesn’t want to. And then everyone will accuse it of selling family jewels. And if it actually sold shares, brokers would push the price down so much that it would be useless. Or, it would have to do an OFS and then bring in LIC to rescue the issue which is neither here nor there, and earns it a bad name,

So, instead, it can “realize value” by this massive debenture silliness.

First, what the government gets is a massive dividend. Effectively, 7,700 cr. (75% of the 10,300 cr. debenture) will be deemed to have been paid as dividends to the government.

Second, the government will get Rs. 2,000 cr. as dividend distribution tax. That’s about 20% of the amount.

Note: They’ll probably choose to sell the bonds instead, to someone like LIC.

The Impact to Other Shareholders

Of the non-government holding of 25% in NTPC, LIC (Life Insurance Corporation of India, the government owned insurer) owns 10%.  FIIs own another 10%.

The deal to you as an investor is;

Basically, you as a shareholder just paid that massive dividend tax to the government and all you got to show for it was a debenture you probably didn’t want.

Smart Spin By The Government

In the end, that’s what this scheme is – a smart way to take money out of NTPC but not divest any shares. They’ve effectively taken out Rs. 7700 cr. from NTPC, taken a Rs. 2000 cr. dividend tax, and still own 75% of the company.

The company though, loses 2000 cr. in dividends, and effectively has to pay interest on what really was its own money. That sucks but when the government is the biggest owner, who’s going to listen?

We have supposedly a great budget and a good job by NTPC. This is basically a phenomenal spin job by the government, and let’s give them credit for that.

Note: You have to read this awesome post on a similar exercise by Neyveli Lignite (fictionalized) in 2006 by Sanjay Bakshi.

And he has great tweets on this topic: here, here and here.

Disclosure: Between NTPC and our portfolio, currently, is a barge pole.