In the Budget, we asked the question: Is a 30,000 cr. debt switch planned for March? Of course it was, it turns out.

The government was looking to switch debt worth 30,000 cr. from an immediate repayment (FY 2016) to a later year. And here’s why: 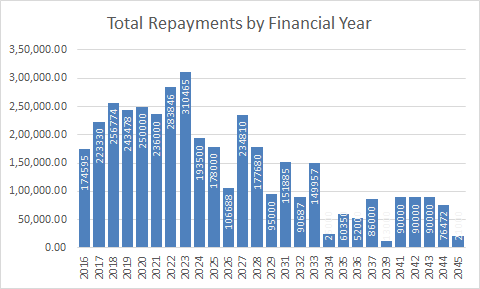 Whatever is repaid has to be re-borrowed because our governments are big ponzi-type schemes – debt can only be paid by issuing more debt. So a “shuffle” in maturity patterns can lead to smoother redemptions and reissues; essentially the government will need to reissue 30,000 cr. lesser of new bonds because of this swap.

But what’s the big deal? Even last year, the government switched out Rs. 31,000 cr. worth debt securities.

There’s a big difference. Last year, the RBI acted like a merchant banker, and did the debt swap with external institutions. Companies like LIC, or pension funds, would own near term bonds, and would want to buy longer term bonds – they will happily exchange these securities so that they can get a hold of a large chunk of longer term bonds locked in.

This time, the RBI did it with its own securities. Meaning, instead of finding a third party that owned recently maturing debt and offering the longer term securities, RBI hunted inside its own books, and exchanged securities maturing in the near term to new securities issued that will mature FY 2027.

What is the significance?

We wonder why the RBI did this instead of swapping the securities in the market with a different institution instead. Were there no takers? Did the pricing of the deal happen at a number very favourable to the government? Why didn’t they publish the prices at which they swapped the debt, since these questions would obviously have come up?  This is why you need a public debt management office, instead of the RBI managing such transactions; there should be no conflict of interest.

If you’re interested, the specific securities that have been switched are: